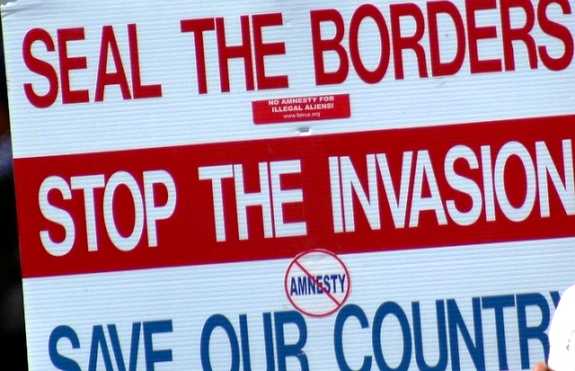 The lines between the anti-immigrant movement and the Tea Party movement are blurred. That is the most important finding of a new report from the Institute for Research and Education on Human Rights (IREHR), entitled Beyond FAIR: The Decline of the Established Anti-Immigrant Organizations and the Rise of Tea Party Nativism. As its title suggests, the report finds that the revenue and membership of traditional anti-immigrant groups have declined in recent years, at the same time some of the Tea Parties have become hot beds of anti-immigrant activism. The report, however, overstates its case in concluding that “to a significant extent, the Tea Parties have usurped the Nativist Establishment and in the process swallowed up many of its activists.” This conclusion discounts the large amount of money and political power that some of the traditional anti-immigrant groups still possess. After all, it is the anti-immigrant groups and not the Tea Parties that have been moving anti-immigrant legislation through state legislatures and town councils from Arizona to Alabama over the past few years.

Nevertheless, the report thoroughly documents a trend which has also been noted by other human rights and immigrant rights advocates. As the Southern Poverty Law Center (SPCL) observed last spring, the Tea Party movement “has become home to many nativist extremists…The lines between the movements have become increasingly blurred, with leaders making official appearances at each other’s events.” This cross-pollination has been most apparent in the case of the Minutemen. For example, according to the IREHR report, leaders of the Minuteman Project went on to run a Tea Party faction.

Based on federal tax filings and other sources of data, the report concludes that there has been “a significant decline in support for the Nativist Establishment, with the numbers of donors/members, organizational financial support, and the number of local anti-immigrant groups all decreasing since a peak in 2007-2008.” However, one must keep in mind that 2007-2008 was a period of intense political activity surrounding the introduction of immigration reform legislation in Congress. Higher levels of involvement and support are to be expected at such a time. Moreover, despite the decline since 2007-2008, groups such as FAIR still have many millions of dollars per year in funding, not to mention the ear of highly placed elected leaders in Congress and in statehouses around the country. In contrast, the Tea Parties have far less money at their disposal and have only a marginal influence on the anti-immigrant legislative agenda.

The authors of the report conclude that:

The newly configured anti-immigrant movement described in this report has developed a new activist constituency, the Tea Parties, even while it has lost some of its established funding sources and membership. Human rights and immigrant advocates now face a civic opposition which has a larger constituency, and an opposition which is harder to delineate and thus more difficult to oppose.

In other words, pro-immigrant advocates who have grown accustomed to tracking traditional anti-immigrant organizations should also be keeping a close eye on the Tea Parties. However, advocates would be wise to keep in mind that the traditional anti-immigrant groups are far from dead. It is these groups, not the Tea Parties, which have the greatest sway in Congress and state legislatures, as well as the biggest bank accounts.