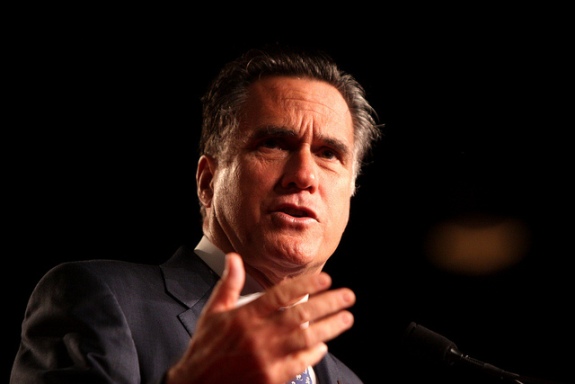 GOP presidential candidate Mitt Romney stole a page from the restrictionists’ playbook this week when he promoted the idea of “self-deportation” during a presidential debate. “If people don’t get work here,” Romney stated, “they’re going to self-deport to a place where they can get work.” Rather than initiate a constructive solution to our nation’s immigration problems, Romney is jumping in bed with immigration restrictionist groups who support policies that tear American families and communities apart, devastate local economies, and place unnecessary burdens on U.S. citizens and lawful immigrants.

Romney’s use of the term “self-deportation” is not at all surprising given his recent collaboration with Kris Kobach, the current Secretary of State of Kansas who continues to serve as chief legal counsel to the Immigration Reform Law Institute (IRLI), an arm of the Federation for American Immigration Reform (FAIR).

Kobach, the self-professed author of several state and local immigration-control bills, advised Romney on immigration during his 2008 presidential bid and has long-promoted the strategy of “attrition through enforcement”— the immigration-control strategy to drive away the unauthorized population by making their lives so miserable that they will choose to “deport themselves” rather than remain in the U.S.

“Attrition through enforcement” laws—like Arizona’s SB1070 and Alabama’s HB56—were explicitly designed to interfere with the everyday activities of immigrants and go far beyond denying unauthorized immigrants work. These laws deny access to housing, school, work, and even water and electricity to anyone who can’t prove legal status.  The laws’ supporters have made it clear that making people miserable and encouraging them to leave the state is the intended consequence of their policies.

It’s troubling that a serious Presidential candidate would adopt the code words of extremist immigration control organizations and propose that making people’s lives miserable so that they’ll leave is an acceptable policy goal.  By using the term “self-deportation,” Romney is making it clear that he is on board with restrictionists groups’ strategy to force all unauthorized immigrants to leave the U.S., regardless of the time they have spent here, U.S. citizen family members, and their years of tax contributions.

Doesn’t this country deserves to hear more detailed and thoughtful approaches from politicians and policy makers—approaches that offer a way forward rather than divisive and punitive so-call “solutions” to unauthorized immigration?