Following State of the Union, President Obama Needs to Follow Through on Immigration Reforms 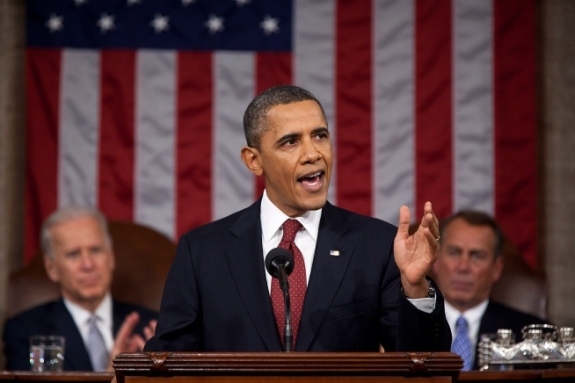 The President’s State of the Union address this week re-iterated some of his key themes on immigration—support for comprehensive reform, dismay that DREAM Act students and foreign students educated in this country have no way to legalize their status, and a belief that he’s done enough to the secure the border. More importantly, he framed these themes in context to America’s economic recovery, innovation and growth. However, while any mention of immigration in the State of the Union is welcome, it’s what the President didn’t say that may have more of an impact on how his administration is remembered this year on immigration—and how his vision is measured by voters in the coming election.

In the State of the Union address, President Obama repeatedly signaled to Congress that he would sign sensible bills to reform our immigration system, big or small. But he quickly noted that partisan politics would make it all but impossible to pass comprehensive reform:

The opponents of action are out of excuses. We should be working on comprehensive immigration reform right now. But if election-year politics keeps Congress from acting on a comprehensive plan, let’s at least agree to stop expelling responsible young people who want to staff our labs, start new businesses, and defend this country. Send me a law that gives them the chance to earn their citizenship. I will sign it right away.

There are plenty of bills that fit this description, from the DREAM Act to proposals offering green cards to foreign graduates in science and engineering to support for immigrant entrepreneurs, but they are just as likely to flounder in the sea of partisan politics as something grander and more comprehensive.

And while the president suggested that the ball was in Congress’s court, he didn’t mention that his Administration has moved forward on reforms that don’t require Congressional action. The Administration has become more aggressive in the last in year in fixing parts of our backward immigration system, such as overhauling immigration detention, a review of the Secure Communities program, a re-invigoration of the use of prosecutorial discretion, and attempts to promote streamlined adjudications and family unity. The latter, announced just weeks ago, has generated real excitement among immigrant communities.

Similarly, changes to the way government officials decide what cases should be prosecuted in immigration court—and what cases should be dropped—have given hope to millions of immigrants that they may be able to stay with their families, at least for a while longer. But there remains considerable uncertainty about how DHS will routinely exercise discretion, especially amidst reports that DREAM Act students and others who clearly fit the government’s low priority status are still being deported.

In the areas of detention reform and Secure Communities, however, the early enthusiasm about change has been replaced by wariness on the part of advocates who want to believe promised reforms will be made. They have been repeatedly disappointed by delays in the detention realm and a continued commitment to keep Secure Communities alive, a program that many believe undermines community safety and policing.  A special task force voted out a series of necessary reforms and gave their report to Secretary Napolitano last September, but DHS has yet to announce how it will implement these recommendations.

Although these ongoing administrative reforms don’t fit tidily into the overarching vision of immigration policy the President laid out in the State of the Union, following through on them would have a lasting effect on both immigration enforcement and the consideration of benefits for those stuck in our broken immigration system. And the President shouldn’t abandon his larger vision. He has made significant strides in helping to reshape how people who don’t much care about immigration think about it and that will be critical when the time comes for comprehensive reform. But for those most directly affected by our immigration crisis, it is the most immediate details that matter most.