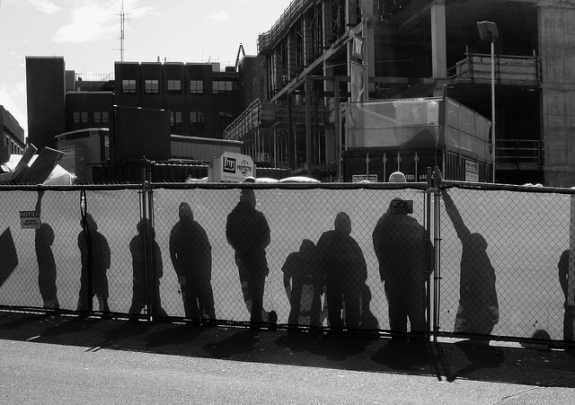 Faced with harsh anti-immigrant laws passed by state or local governments, most unauthorized immigrants do not return to their home countries. That is the inescapable conclusion of a new report from the Center for American Progress (CAP), entitled Staying Put but Still in the Shadows, by Leah Muse-Orlinoff. The report finds that unauthorized immigrants react to anti-immigrant laws by moving to a different county or state, or by staying right where they are and isolating themselves even further from the larger society. In other words, GOP presidential contender Mitt Romney was wrong when he argued that a “self deportation” solution to the problem of unauthorized immigration might actually work.

The CAP report is based heavily on research conducted in Oklahoma City. As the report notes, “Oklahoma City passed anti-immigrant ordinances in 2007 and 2009, well before states such as Arizona, Georgia, or Alabama.” The University of California, San Diego’s Mexican Migration Field Research Project conducted surveys and interviews in Oklahoma City in 2009 and 2010, as well as in Tlacuitapa, Mexico, which is a “sending community” of immigrants to Oklahoma City.

There are three principal reasons that unauthorized immigrants don’t leave the country:

The findings of the CAP report poke some very large holes in the theory behind the “attrition through enforcement” strategy for dealing with unauthorized immigration. The goal of this approach is to pass anti-immigrant laws so onerous as “to create a climate of fear and make life so difficult for immigrants that they will self-deport.” But this does not happen. As the CAP report puts it, attrition policies “do not lead to large-scale resettlement. But they do complicate the relationships between local law enforcement officials, political leaders, and immigrant communities, to the detriment of all three.”

The CAP report argues that “instead of unsuccessfully trying to drive unauthorized immigrants out of the country, we should work to integrate them, which will keep families together, improve community safety, and better the economy all at the same time.”

The only way to do this, in turn, is through federally enacted “comprehensive immigration reform, bringing immigrants out of the shadows to vet them in a secure and orderly way rather than further criminalizing them.”