Being Anti-Immigrant Doesn’t Work in Politics, Even in the South 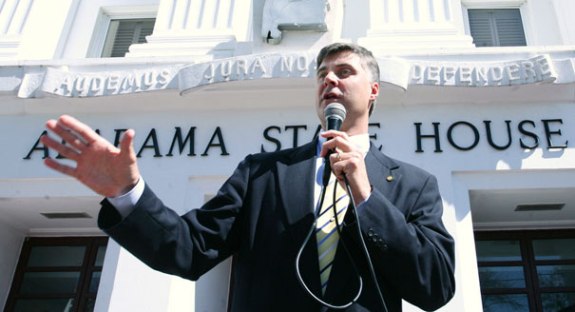 While anti-immigrant sentiment may win candidates a few headlines, it certainly doesn’t resonate with every day voters. Following Alabama’s GOP primary this week, a CNN exit poll found that “illegal immigration” was not a top-of-mind issue for many Alabamians. According to the survey, only 3% of the respondents cited “illegal immigration” as the most important issue for them, trailing “the economy” at 59% and the nation’s “budget deficit” at 25%.  Ironically, residents of the state with the toughest anti-immigrant law in the nation (HB 56) don’t see eye to eye with the legislators who pushed the law through the legislature last year. In fact, residents don’t seem to want anti-immigrant legislators representing them in Congress.

Scott Beason, one of the main co-sponsors of HB 56, failed to turn his anti-immigrant notoriety into political gain. Beason was defeated yesterday in his run to unseat an incumbent and become the republican nominee for Congress. According to the Birmingham News, even residents of his hometown weren’t fully behind him. Remember, this is the same Scott Beason who claims his “empty the clip on illegal immigration” was taken out of context.

Speaking of politicians running on the backs of undocumented immigrants, Mitt Romney conspicuously said nary a word on the topic of HB 56 while campaigning in Alabama.  As Romney emerges as the most likely candidate for the nomination, the Huffington Post reports he has decided to tone down his anti-immigrant rhetoric for fear of “alienating Latino voters in the general election.”

A Fox News Latino poll released last week shows that Mitt Romney would win only 14% of the Latino vote to Obama’s 70% in a general election. This would put him significantly below the percentage of the Latino vote needed to win the White House (40%) and even below what John McCain received in 2008.