Is Mississippi About to Make a Costly Mistake on Immigration? 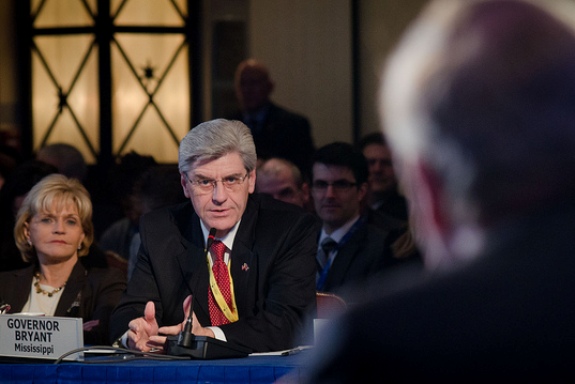 Either Mississippi lawmakers aren’t aware of the hefty fiscal and legal burdens brought on by harsh immigration legislation in other states, or they just don’t care. This week, the Mississippi House passed HB 488, an immigration enforcement bill that allows local law enforcement to determine the immigration status of individuals during an arrest whom they “reasonably suspect” is in the country without documents. The bill, which passed out of the House by a vote of 70-47 this week, also makes it illegal for undocumented immigrants to enter into business transactions with the state, including the issuance of business and drivers licenses. The bill now goes to Mississippi’s Republican-controlled Senate.

Although certain provisions—such as requiring public schools to determine the legal status of enrolling students and making it a crime to fail to carry proper immigration documents—were stripped from the House bill, the idea of making “attrition through enforcement” (that is, making life so miserable for undocumented immigrants that they leave the state) Mississippi’s official immigration policy is not only ineffective, it’s also costly and hugely damaging to the state’s reputation.

Mississippi lawmakers need look no further than neighboring Alabama, where last week, a federal judge blocked two more provisions of the state’s controversial immigration law, HB 56. To date, six provisions of Alabama’s extreme law have been enjoined—and for good reason. The controversial law would have, among other things, denied basic utilities, like water, gas, and electric services, to undocumented immigrants in the state. HB 56 would also have cost the state $11 billion, plus $265 million in state income and sales tax, according to a report out of the University of Alabama. Is this really want Mississippians want for their state?

According to Mississippi Governor, Phil Bryant, it is. Earlier this month, Gov. Bryant spoke out in favor of HB 488, saying that “a crackdown is urgently needed” and that “perhaps it’s boat-rocking time in Mississippi.” Really, Gov. Bryant? By “boat-rocking” do you mean “budget-rocking?” The state of Mississippi is facing a $634 million budget deficit in FY2012, according to the Center on Budget and Policy Priorities.

Clearly, as demonstrated by nearly every other state that passed similar immigration measures, these laws are as costly to defend and implement as they are on state industries.

But none of these fiscal impacts are of concern to Mississippi legislators, who apparently voted NOT to attach a fiscal note to HB 488.

All of this begs the question, can Mississippi really afford to follow in the same fiscal footsteps as these other states? And why, after the countless legal challenges, enjoinments, and fiscal and political fallout in other states, do Mississippi lawmakers want a bill like this? Is this really the reputation Mississippi wants to present to the country? To possible foreign business investors?

“If we pass this bill, it will set Mississippi back 60 years. Let us show America we are not the narrow-minded people they say we are.”