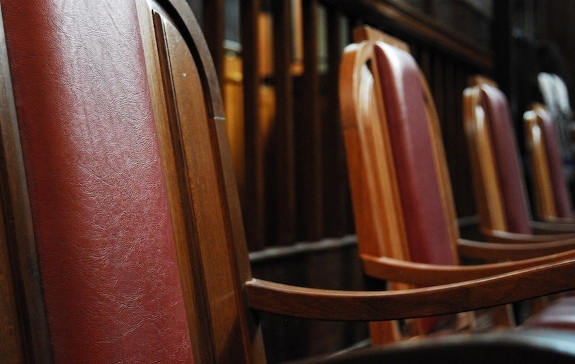 Almost two years to the day after Arizona enacted the notorious immigration law known as SB 1070, the Supreme Court heard arguments in what could be the first of many cases over the validity of the measure. Although most critics of the law have focused on its potential for civil rights violations, the only question before the Justices was whether federal immigration laws “preempt” four provisions of SB 1070 that were blocked by lower courts. While the ultimate fate of those provisions will not be known until a ruling is announced, a few preliminary observations can be made based on the questions posed by the Justices.

To begin with, the government’s arguments against Section 2(B)—which requires police to check the immigration status of all persons they stop or arrest if “reasonable suspicion” exists that they are in the country illegally—were met with great skepticism by the Court. The United States had argued that requiring such status checks would disrupt the federal government’s focus on noncitizens convicted of serious crimes because it shifts the allocation of resources to non-serious offenders. As Chief Justice Roberts stated, however, simply asking the government whether a particular person is in the country illegally doesn’t require the government to initiate removal proceedings against that person.

While the questioning may suggest that the Court could lift the injunction against Section 2(B), numerous Justices expressed concern about how the provision would be applied in practice. For example, Justice Sotomayor asked how long officers would be able to detain people without violating the Constitution. And Justice Alito asked whether Arizona officers would always have to check the immigration status of people from states that issue driver’s licenses without proof of lawful presence.

While the discussion of Section 2(B) dominated most of the argument, signs emerged during other rounds of questioning that the injunctions may be upheld against parts of SB 1070 that create new immigration-related crimes. Under Section 3, for example, immigrants can be prosecuted under Arizona law for failing to obtain or carry registration papers from the federal government. But as Justice Alito noted, some immigrants—like pending asylum seekers—may be ineligible for registration but nonetheless permitted to reside in the country. Under Section 5, meanwhile, immigrants can be imprisoned for performing or applying for work inside the state’s borders. But as Justice Sotomayor pointed out, Congress has repeatedly rejected proposals to impose criminal penalties on unauthorized workers.

The one provision of SB 1070 that generated little discussion was Section 6, which allows local police to arrest legal immigrants who previously committed crimes that make them eligible for deportation. Justice Ginsburg pointed out that determining whether an offense makes someone “removable” can be a complex inquiry that local police could not practically make on the street. But the argument otherwise featured little dialogue about the provision, aside from a concession by Arizona’s lawyer that it would not permit arrests simply for overstaying a temporary visa.

In sum, while the argument represented the first time the Supreme Court considered the validity of SB 1070, it may well not be the last. The Justices’ questions made clear that even if part or all of the Arizona law is not preempted by federal statutes, it may be impossible to apply in practice without violating individuals’ constitutional rights. Given the demonstrated policy drawbacks of state immigration enforcement laws, it remains possible that other states will decline to enact copycat measures in the future. But even if states do press forward, today’s Supreme Court argument showed that legal questions about such laws will continue to occupy courts for years to come.