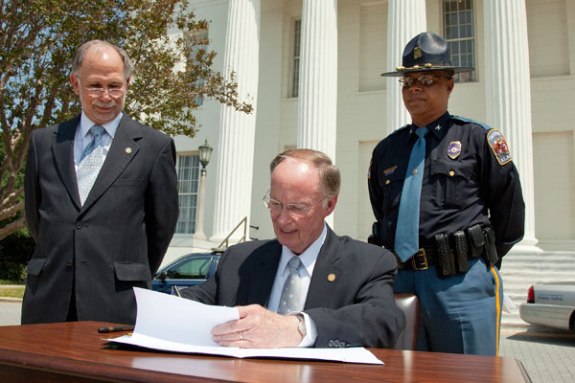 Last week, Alabama Governor Robert Bentley publically criticized a bill intended to revise key sections of the state’s controversial immigration law (HB 56). He even announced a special legislative session to address his issues with the bill­­­­­—namely, a provision that requires school officials to check the immigration status of enrolling students and that of their parents and a provision that requires Alabama’s Department of Homeland Security to publically post the names of undocumented immigrants on their website. The day after his announcement, however, Governor Bentley backpedaled his criticisms, declared the legislature didn’t have the “appetite to address further revisions,” and signed the bill (HB 658) into law.

Governor Bentley explained his reversal in a statement following the bill’s signing:

The bill that the full Senate ultimately passed was different and did not reflect all of the changes we had agreed upon. However, the bill did include most of the suggested revisions and represented substantial progress in simplifying the bill while keeping it strong … as we worked with legislators during the special session, it became clear that the Legislature did not have the appetite for addressing further revisions at this time.

So how does HB 658 affect Alabama’s already extreme immigration law? In addition to keeping the “papers please” provision of the original law intact, HB 658:

To date, several provisions of HB 56 have been temporarily enjoined by the courts, including the school provision, harboring provision, provisions that make it a crime for an unauthorized immigrant to fail to carry immigration documentation or apply for, solicit or perform work, a provision baring state courts from enforcing a contract with an unlawfully present person, and a provision which makes it a felony for an undocumented immigrant to enter into a “business contract” with the state. The courts said they would not issue a final ruling until after the Supreme Court issues a decision on Arizona’s immigration law in June.

In the meantime, Govenor Bentley said they will “re-address issues” with the law “if the need arises.”