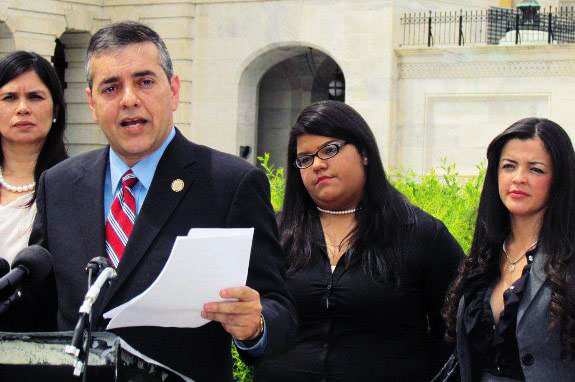 When news broke yesterday that a Florida congressman introduced an alternative version of the DREAM Act, many assumed it was Sen. Marco Rubio, who has been promising for months to introduce such legislation. In fact, the bill in question—dubbed the STARS Act—was introduced by Rep. David Rivera, a member of the House who introduced similar legislation (the ARMS Act) last January. Although Rivera’s proposals would benefit fewer people than the original DREAM Act, they would put qualified applicants on a path that would ultimately lead to permanent residency. From that perspective, they differ significantly from the proposal Senator Rubio has been discussing, which reportedly does not include a dedicated path to permanent residency.

Under the version of the DREAM Act (S. 952) currently before Congress, undocumented immigrants who complete two years of college or military service could ultimately obtain permanent residency (i.e. a “green card”), a prerequisite for obtaining U.S. citizenship. Relief would be available to individuals who, among other things, entered the country before age 15, have resided in the United States for at least five years, and initially apply before age 29. (The DREAM Act would also repeal a federal law barring states from offering lower tuition rates to undocumented students on account of their in-state residency.)

Similarly, each of Rep. Rivera’s proposals would put qualified applicants on a path to permanent residency after a prior period in conditional status. Under the ARMS Act, which Rivera introduced in January, undocumented immigrants could eventually obtain permanent residence if they previously spent two years in active military service or four years in the reserves. Meanwhile, under the STARS Act, which was introduced this week, undocumented graduates of four-year colleges in the United States could secure green cards after eight years in temporary status, although most would have to initially apply before age 19.

By contrast, Sen. Rubio’s alternative proposal would reportedly provide undocumented youths with temporary immigration status while in college or the military but, importantly, contain no dedicated provision for obtaining permanent residency. Instead, as a spokesman for the Senator told a Washington newspaper, beneficiaries would have to use “existing pathways” to obtain permanent residency—meaning they could only qualify if they would otherwise be eligible for a green card.

As explained in a fact sheet released today, however, the existing pathways to permanent residency are quite limited, which is why legislation like the DREAM Act often includes a dedicated provision for obtaining a green card. If legislation without a dedicated pathway is enacted, it would have to take into account a host of issues that plague applicants within the current system.

Under current immigration laws, for example, youths who originally entered the country without permission cannot qualify for a green card without leaving the United States. However, if they were unlawfully present in the United States for more than six months after their 18th birthday, they would become inadmissible for up to ten years after their departure. Thus, Sen. Rubio’s alternative could place many DREAMers in a Catch-22: required to depart the United Statesto qualify for a green card but barred from returning as soon as they leave the country. (For an example of this problem, see this story on Indiana high school student Elizabeth Olivas, a high school salutatorian who faced a three-year bar on readmission after she left the country to obtain a green card.)

The existence of the DREAM Act and its various iterations demonstrates a widespread recognition that young children brought to the United States should not be held accountable for their lack of immigration status. To date, existing proposals have differed mostly with respect to cutoff dates, the scope of eligibility, and other requirements for potential beneficiaries. Should Senator Rubio introduce a bill in line with his public comments thus far, however, the debate will shift to a more fundamental question: whether it is sufficient to give undocumented young people a temporary legal status, or whether Congress should put them on a dedicated path to permanent residency.