Advocates Call on Obama Administration to Protect Immigrant Families, Not Deport Them 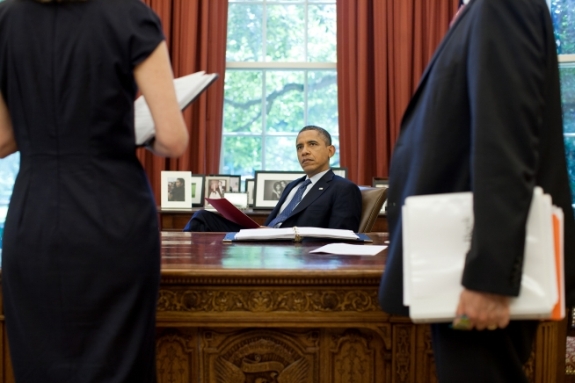 Nearly a year ago, ICE Director John Morton issued a memo on prosecutorial discretion which led to the review of 300,000 immigration cases currently in removal proceedings. Advocates initially applauded this announcement, hoping that the administration would move quickly to close low-level, non-criminal immigration cases. But today, disappointed by the program’s low closure rate, advocates and community leaders called on the Obama administration to make good on its promise of using of prosecutorial discretion to protect DREAMers and immigrant families from deportation.

Today, community leaders, attorneys, and activitists expressed their outrage, calling the administration’s attempt to use prosecutorial discretion a “failure.” As previously reported, of the 290,000 deportation cases reviewed by ICE attorneys, only 8,400 immigrants received offers of administrative closure. Of those, only 4,400 immigrants accepted said offer. Furthermore, DHS has deemed just 7.2% of cases eligible for administrative closure, a number that keeps dropping with each review period (from 8% to 6.2% to 5.9% as of the April 16 to May 29 review period).

Angelica Salas, director of the Coalition for Humane Immigrant Rights of Los Angeles (CHIRLA) demanded swift action from the administration:

Families are still being torn apart, despite being good candidates for prosecutorial discretion. Over 1 million immigrants were deported over FY 2009, 2010 and 2011. And families are being shattered. Nearly 46,000 mothers and fathers of U.S. citizen children were deported in 2011. At this point, fewer than 5,000 have been administratively closed. Most of the individuals who are being deported have not actually committed any criminal activity. We demand that the administration take swift and immediate action to help protect immigrant families.

Under this program, no more than 4 or 5% of immigrants are getting relief. And this relief is the weakest form available, similar to putting people’s files on the shelf. ICE has been operating from a little checklist. If you fall within this checklist, you get relief. If you don’t, you won’t get an offer. The totality of circumstances is not being considered. The program has been a failure.

Specifically, advocates asked the administration to protect DREAMers from deportation, make good on its promise of prosecutorial discretion by providing real relief—including work authorization—to workers pursuing civil and labor rights claims and to families threatened with separation. They also called on DHS to stop the controversial Secure Communities program which some called a “deportation mill” that erodes trust between local police and immigrant communities. And according to Gaby Pacheco, an organizer for United We Dream network, advocates “will continue to move forward … and take [their] voices to the White House until they see Obama exercise leadership.”

The message from today’s press conference was clear—communities are tired of waiting for the Obama administration to deliver concrete immigration relief. With no legislation in sight, administrative relief has become the only alternative for thousands of people who have deep ties to the United States. Even though the prosecutorial discretion memos signal change down the road, it is not coming fast or reliably enough for those who face deportation today.