Even a Fifth Grader Realizes the Power of the American Dream 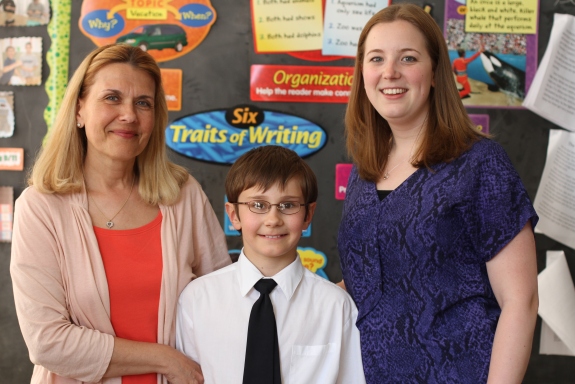 Shortly after President Obama announced that DHS will halt the deportations of eligible undocumented youth, a Chicago-area fifth grader delivered a speech of his own. Over the weekend, Alexander Tymouch was honored as the National 5th Grade Creative Writing Contest winner at the American Immigration Council’s Annual Benefit Dinner where he read his essay, “America, the Magical Land,” alongside Grammy-nominated musicians at the Gaylord Opryland Hotel in Nashville.

Here is an excerpt:

There is a magical place in this world,
Where people come to look for freedom and happiness.
They sail for weeks through the swaying ocean,
Then they finally arrive at the mesmerizing new land,
They try to keep their own ways at first.
They celebrate the same holidays,
Wear the same clothes,
And eat the same food.
They do everything the same as before,
But eventually…
They start to learn from one another
And exchange their cultures.
It’s like an experienced cook came and learned to dance,
While a graceful dancer came and learned to sew.
A talented tailor came and learned to bake,
While a baker came and learned to farm.
They thought they were doing it for their own benefit,
But in fact they were making history.
These people learned different cultures
And shared their own cultures too.
And while they were as different as they could be,
They became friends more quickly
By teaching one another
And learning from one another.
And just like that, a new country was born.
But what is truly unbelievable,
Is the fact that this was all created
By ordinary families of immigrants
In that same beautiful, magical place,
In that amazing year round wonderland,
That same four seasoned country,
America.

These are just a few lines from Alex’s winning essay, “America, the Magical Land,” chosen out of thousands of entries from across the country by a panel of celebrity judges, including author Peter Coan (Towards a Better Life) and Presidential Medal of Freedom Recipient and Holocaust survivor, Gerda Weissman Klein.

Alex and all participating 5th graders remind us that immigration is something to celebrate, with their essays that explain “Why I am Glad America is a Nation of Immigrants.” Alex’s essay describes a beautiful America of respect and community.

Amidst the debates, frustrations and political posturing over immigration issues, Alex, a proud American with Ukrainian roots, provides all of us with the opportunity to step back and reflect on the true meaning of America and the power of the American DREAM.