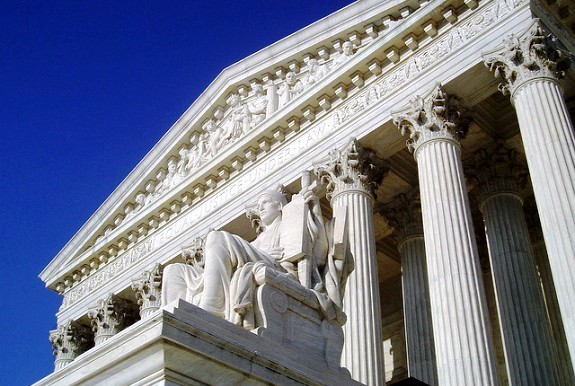 The Supreme Court issued a mixed ruling on Monday in the Obama administration’s challenge to Arizona SB 1070. By a 5-3 margin, the Justices upheld the injunction against provisions of the law that authorize police to arrest immigrants suspected of committing removable offenses (Section 6), and that impose penalties under state law for immigrants who fail to carry “registration” papers (Section 3) or attempt to work without federal authorization (Section 5). Although the Court allowed the implementation of the provision of SB 1070 requiring police to determine the immigration status of people in custody “reasonable suspicion” exists that they are in the country unlawfully (Section 2(B)), it left open the door to future legal challenges.

As a legal matter, the ruling mostly vindicates the arguments of the Obama administration, which sued Arizona SB 1070 on grounds that it conflicted with—and was therefore “preempted” by—federal immigration law. A federal judge in Arizona blocked four provisions of SB 1070 before the law took effect, and the injunction was later affirmed by a federal appeals court in San Francisco. At the Supreme Court, the majority opinion was supported by two Republican appointees—Justice Kennedy, who authored the decision, and Chief Justice Roberts—as well as three Democratic appointees—Justice Ginsburg, Justice Breyer, and Justice Sotomayor. (Justice Kagan, who previously served in the administration, recused herself from the case.)

After beginning its decision by affirming the importance of federal control of immigration enforcement, the Court upheld the injunction against Section 3, which makes it a misdemeanor under state law for immigrants to fail to seek or carry “registration” papers provided by the federal government. Citing a case decided in the 1940s, the majority noted that the federal government had exercised exclusive responsibility for registering immigrants for decades. As Justice Kennedy wrote in striking down the provision, “[p]ermitting the State to impose its own penalties for the federal offenses here would conflict with the careful framework Congress adopted.” (Justice Alito did not join the majority opinion but wrote in dissent that he also believed that Section 3 should be enjoined.)

The majority next upheld the injunction against Section 5(C), which makes it a crime under Arizona law for immigrants to work (or even solicit work) without federal employment authorization. The majority noted that in passing legislation relating to the employment of immigrants, Congress specifically declined to impose criminal penalties on immigrants themselves who work without authorization. As the Court put it, “making criminals out of aliens engaged in unauthorized work—aliens who already face the possibility of employer exploitation because of their removable status—would be inconsistent with federal policy and objectives.”

The Court then struck down Section 6, which gives local police authority to arrest any immigrant—including those who are lawfully present—for having previously committed a “removable” offense. As the majority noted, giving such authority to local police would in effect permit the state to create its own immigration policy. “By authorizing state officers to decide whether an alien should be detained for being removable,” Justice Kennedy wrote, the provision “violates the principle that the removal process is entrusted to the discretion of the Federal Government.”

Finally, the court reversed—for now—the injunction against Section 2(B), the notorious provision requiring local police to investigate the immigration status of any person stopped or arrested where “reasonable suspicion” exists that they are in the country unlawfully. Importantly, however, the Court did not find that the provision was immune from legal challenge. Instead, the majority found the injunction was premature because it was unclear how the provision would be applied in practice. Indeed, the Court specifically stated that the opinion “does not foreclose other preemption and constitutional challenges to the law as interpreted and applied after it goes into effect.”

In sum, while the Court did not provide a complete victory to the Obama administration, the decision serves as a stinging rebuke to arguments advanced by proponents of SB 1070 that local police have “inherent” authority to enforce the federal immigration laws. As the Supreme Court made clear, the federal government—and only the federal government—has primary authority to create and enforce the immigration laws. “Arizona may have understandable frustrations with the problems caused by illegal immigration,” Justice Kennedy pointedly concluded, “but the State may not pursue policies that undermine federal law.”