How Should Obama Administration Proceed with Deferred Action Program? 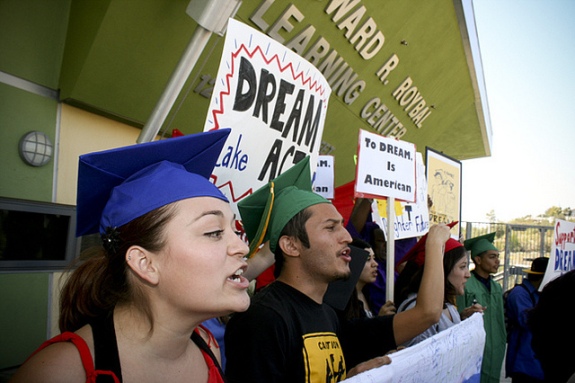 In a June 15th memo announcing deferred action for immigrant youth, DHS Secretary Janet Napolitano gave USCIS 60 days to come up with a process that will allow these young people to affirmatively apply for the chance to work, study, and live in the U.S. without fear of deportation. To be sure, USCIS staff and their counterparts at ICE, CBP, and DHS, have been entrusted with a difficult job—one that requires balancing legal and practical implementation issues against high expectations and years of built up frustration over the lack of immigration reform. But the real challenge is acknowledging that every single decision they make about the program has the chance to make it harder or easier for young people to realize their dreams.

While numerous immigration advocacy, law, and policy organizations have already  issued technical recommendations on what needs to be considered moving forward, here are a few other principles that folks should keep in mind to ensure DREAMers get their due.

1. Compassionate use of prosecutorial discretion led to this program, and compassionate prosecutorial discretion must continue to guide it. When President Obama said that granting deferred action to DREAMers was the “right thing to do,” he wasn’t just making a political statement. The use of discretion is, at its core, about exercising good judgment. Part of good judgment is compassion. As government officials decide how to interpret each aspect of Secretary Napolitano’s directive, it is essential to keep compassion central to the discussion. Ultimately, Congress will have to determine what the criteria for adjustment of status under the DREAM Act should be, but in the meantime, DHS should read the Secretary’s directive as generously as possible in order to ensure that everyone who meets the spirit of the Secretary’s directive has the chance this program offers.

2. The unique circumstances of DREAMers create opportunities to shape a flexible and generous program. The criteria set out to receive deferred action, which includes being under the age of 31, having been in school, and having an essentially clean record (no felony convictions, serious misdemeanors or an aggregation of petty crimes),  sound simple on their face, but deciding on the evidence needed to prove those criteria can consume hundreds of hours in a bureaucracy. Keeping any forms or requirements as simple as possible is essential to making the program work. After all, you are dealing with young people—many of whom are still in high school—who are going to be able to prove that they have lived here for years based on school records, social media, and their sometimes very active political lives. We know they are undocumented. We know they have been here a long time. The program that is crafted to process their requests for deferred action should reflect that.

3.Despite their unique circumstances, the program won’t work without incentives for coming forward. While it might seem that deferred action and the prospect of work authorization are incentive enough, the way the program is crafted will shape whether people use it. As noted, simplicity makes it easier to process applications, but it also makes it easier for young people (who can apply affirmatively at the age of 15) to negotiate the process on their own. And for those who have not come forward already, announcing that they are undocumented poses huge risks, as they potentially expose themselves to deportation. Consequently, many advocacy groups are calling for strict confidentiality requirements—not to protect people who want to game the system but to ensure that the system succeeds. Rather than brush these concerns aside, they need to be factored into the creation of the program from the start.

4. Everybody needs to listen. USCIS, in particular, has built an expansive public engagement program that attempts to integrate public discussion into its execution of immigration benefits and policies. Director Alejandro Mayorkas has promised to use the public engagement model frequently in the course of creating the new program. There will be a lot of valuable information that comes from those public engagements. Formal access to this level of public comments and discussion is an enormous opportunity to gather vital information to make the program work. At the same time, it’s an opportunity to share with the immigrant advocacy community the genuine struggles and challenges the government is facing in getting this program off the ground. It’s a cliché, perhaps, to say that working together will make the program work, but with 60 days, and thousands of lives in the balance, listening to each other is essential.

Disagreements over the details are inevitable, but if we agree on the big picture, the chances that a workable program that has integrity and trust emerges increases. Ultimately, that should be the goal for every government program. The deferred action program gives us a unique chance to actually make it happen—together.