According to Scott Beason, Alabamans Will Return to “Menial Jobs” Over Time 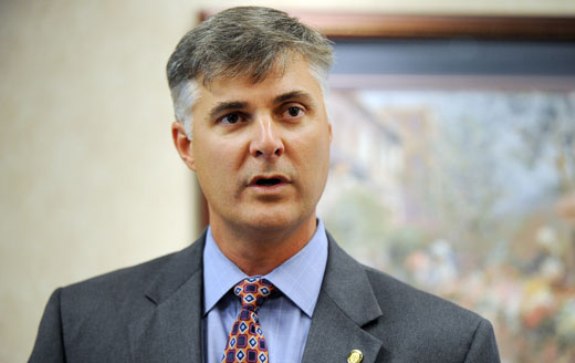 Alabama State Senator Scott Beason continues to link the state’s recent dip in unemployment to its extreme immigration law (HB 56), even though there is no evidence to support that this theory. In fact, many Alabama business have reported difficulties in replacing immigrant workers, many of whom have left the state or gone further underground. But in a recent effort to address this reported labor shortage, Sen. Beason—a sponsor of HB 56—managed to insult both immigrants and native Alabamans alike.

According to Sen. Beason, who continues to insist HB 56 is driving tens of thousands of immigrants from the state and putting Alabamians to work—the solution to replacing workers really  just boils down to native-born “work ethic:”

Asked about employers’ recruitment difficulties, Beason said it would take time for Alabama natives to return to the kind of menial jobs they did before immigrants crowded out the field, accepting work for lower wages.  He said he hoped that the law would improve the “work ethic” of young people and give jobless dropouts a chance to start over.

While proponents of Alabama’s HB56 still contend the law will save the state millions of dollars and create jobs for Alabamans, reports suggest the opposite. Employers have reported an inability to find native born workers willing to pick crops, hang drywall, and do landscaping.

Frank Singleton, a poultry producer, reported that after the law took effect, 250 local residents showed up for a job fair, but few were hired, and those that were hired quit. Singleton also reported that even legal Hispanic workers have left their jobs, most likely to be with fleeing undocumented immigrant spouses.

“This law has created a chilling effect on the whole Latino community,” Singleton said. “Since the law took effect, our turnover rate has gone through the roof.”

Although Alabama has experienced a recent dip in unemployment (from 9.8% to 7.2%), that drop is comparative to other states’s rates—states that have not passed restrictive immigration laws. The decrease in Alabama’s unemployment rate may also be chalked up to the fact that fewer people are looking for jobs rather than more people getting jobs.

Rather than scapegoating immigrants and insulting the state’s labor force, maybe Alabama leaders should focus on developing a well-educated, productive workforce, ensuring fair and safe workplace conditions for all workers, and supporting efforts to create a well-functioning legal immigration system for the 21st century.