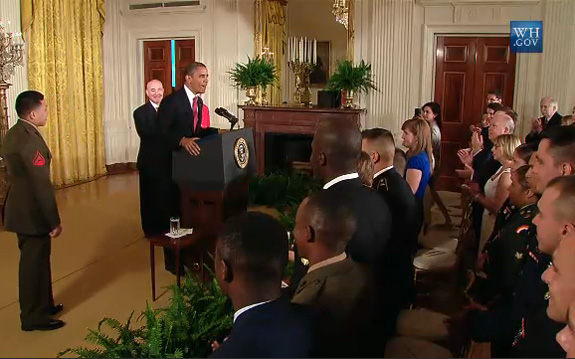 Countless Americans will celebrate America’s 236th birthday today by joining friends and family for food and fireworks. Many will just enjoy the day, others will recall our Founding Fathers’  declaration of independence, and others will raise their right hand, swear an oath of allegiance, and become citizens of the United States of America. Across the country today, men and women from every corner of the globe will stand side by side and swear to “support and defend the Constitution and laws of the United States of America,” and reminding each and everyone one of us of the power and promise of the American Dream.

At the White House this morning, President Barack Obama joined dozens of inspiring immigrant men and women currently serving in the U.S. military as they became citizens of a country they’ve already staked their lives to protect. Here are just a few of those brave men and women:

Terence Njikang Ekabe, born in Cameroon, enlisted in the Air Force in June 2011 as a 4N0/med technician. Airman Ekabe also helped raise money for Veterans’ families, Airmen in need, and the Air Force Assistance Fund. His charitable giving extends beyond the United States to his home country where he raised $3,000 worth of toys, clothing, and others items for the village children of Cameroon during Christmas.

Silvano Carcamo, born in Honduras, moved to Springfield, OH in 1996. Specialist Carcamo enlisted in the Army in October 2009 and became a medic. His first duty station was Bravo Troop, 3rd Squadron, 71st Cavalry Regiment, 3rd Infantry Brigade Combat Team, 10th Mountain Division where he served as a line medic. During his deployment from March 2011 to March 2012 he earned several awards among them an Army Achievement Medal, Combat Medic Badge, and a Navy Achievement Medal.

Faye Ubad Ngirchomlei, born in Palau, enlisted in the Army in 2008.  In April 2009, Nigirchomlei was assigned to 511th Military Police Company at Fort Drum, NY as Automated Logistic Specialist. She was deployed to Kandahar, Afghanistan where she was responsible for ensuring the maintenance section supported outlying platoons, with supplies and other support services.

Throughout U.S. history, immigrants have voluntarily served in all branches of the U.S. military.  At last count, foreign-born service members accounted for approximately 8% of the 1.4 million military personnel on active duty. Experts acknowledge that without the contributions of immigrants, the military could not meet its recruiting goals and could not fill the need for foreign-language translators, interpreters, and cultural experts.

Today, as we celebrate the freedoms we enjoy as Americans, let us also remember those who have struggled to secure that freedom, and the many immigrants who have and continue to fight to keep the American Dream alive.