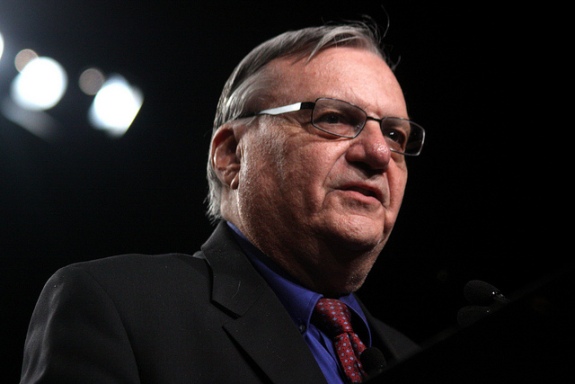 Maricopa County Sheriff Joe Arpaio may finally face the music this week in a federal trial in Phoenix. The renowned anti-immigrant media glutton and self-proclaimed “America’s Toughest Sheriff” stands accused of discrimination and harassment charges in a class action lawsuit involving the ACLU and MALDEF. Arpaio has a long history of abuse and discrimination in the name of immigration enforcement—from a segregated tent city to unlawful stops and forcing inmates to wear pink underwear. In fact, Arpaio is also the subject of a lawsuit filed by the Department of Justice earlier this year alleging that Arpaio and his officers targeted Latino drivers during traffic stops and neighborhood sweeps and used ethnic slurs against Latino inmates in county jails.

In this week’s class action lawsuit, Melendres v. Arpaio, plaintiffs say they have been unlawfully detained, questioned, and arrested by Arpaio and his officers for the sole purpose of investigating their immigration status. They claim that “[Arpaio] and his deputies … made illegal stops, searches and arrests, staged wrongful neighborhood and workplace raids, and provoked widespread fear among citizens, legal residents and undocumented immigrants alike,” actions which they say violate the county’s 287(g) MOU agreement with ICE and the Fourth and Fourteenth Amendment to the U.S. Constitution.

Manuel de Jesus Ortega Melendres, for example, said that Arpaio’s deputies arrested him, handcuffed him for hours, failed to read him his rights or allow him to make a call or even tell him why he was arrested. Similarly, two other plaintiffs, both U.S. citizens, claimed that they were “accosted by deputies at gunpoint during a neighborhood sweep for no explained reason.”

Arpaio has routinely denied charges of profiling and most recently, in response to the DOJ case, said that the government was “throwing the race card.” “It’s always easy to throw the race card in there and that’s what they’re doing in Washington today,” Arpaio said. “When we go to court, they are going to have to come up with all the evidence where they are accusing me and my dedicated deputies of racial profiling.”

Although Arpaio is already facing two lawsuits centered on accusations of racial profiling, legal experts expect there to be even more in light of the Supreme Court’s recent ruling on Arizona’s extreme immigration law, SB 1070. While the Court upheld the provision of Arizona’s law that requires police to determine the immigration status of those they reasonably suspect are in the country without documents, legal experts agree that the Court left the door open to future legal challenges based on the way the law is implemented, highlighting the possibility for racial profiling.

Legal experts, advocates and those concerned with Sheriff Arpaio’s enforcement practices will certainly stayed tuned this week as this trial unfolds. As the Times reports, although the “trial this week does not deal with police conduct under [SB 1070] … it does suggest that racial profiling is a deep-seated problem, certainly in Maricopa County.”