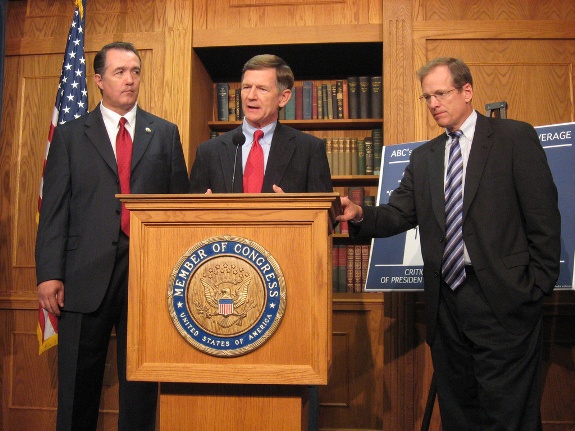 Some members of Congress are intent on portraying the Obama administration as “weak” on immigration enforcement, and they aren’t going to let facts get in their way.  Yesterday, for example, the Congressional Research Service (CRS) released new data on individuals who had been identified through Secure Communities (S-Comm) but against whom ICE had not taken enforcement action.  House Judiciary Chair Lamar Smith characterized the data as proof that the Obama administration has used prosecutorial discretion “recklessly and to the detriment of the American people.”  However, a close look at the data reveals that Smith’s sweeping allegations do not hold water.  By misusing terms like “recidivism,” and by failing to distinguish between arrests and convictions, Smith intends to paint immigrants as criminals—a link that has been disproven over and over again.

According to the CRS report, in addition to nearly 11,000 naturalized U.S. citizens that received an S-Comm “hit,” ICE declined to arrest or take other enforcement against an additional 159,000 immigrants identified through the program. Of those, however, nearly 70% were LPRs or other legally present immigrants, who are not subject to deportation unless they’ve been convicted of a crime that would make them removable.  Thus, since the S-Comm match takes place at the time of booking and not conviction, ICE had no legal authority to take action against these individuals.

The report also says that of the 159,000 identified by S-Comm that ICE did not arrest, 26,412 were subsequently re-arrested. Arrests do not always lead to convictions, though, and the report did not provide any data on how many of these noncitizens were found guilty of the charges for which they were arrested. In addition, nearly three-fourths (72.4%) of noncitizens who were re-arrested were LPRs and other legal immigrants whom ICE likely didn’t have the authority to arrest in the first place. In total, then, CRS found only 7,283 non-citizens that ICE likely had the authority to take action against after an S-Comm hit, but did not, and were subsequently re-arrested. As noted in today’s Los Angeles Times, the recidivism rate cited in the report is less than half that of the prison population at large.

Immigration restrictionists will undoubtedly use these findings to show that harsher immigration enforcement is necessary. However, it’s important to accurately represent the facts, even when they don’t support the point restrictionists want to make. Using this CRS data to claim gross negligence by the government or as proof of immigrant criminality is disingenuous.