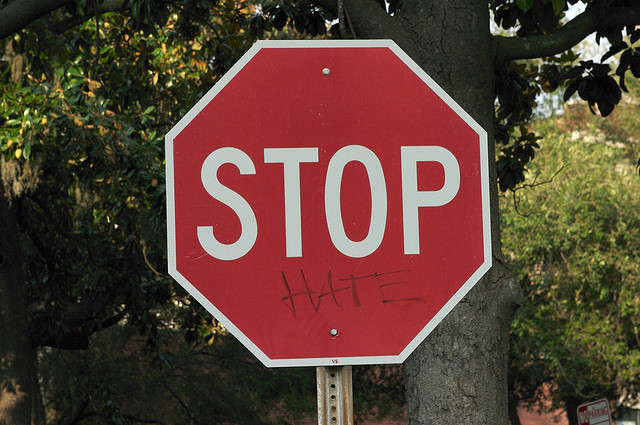 According to a new report from the National Immigration Law Center, anti-Latino discrimination is alive and well in Alabama, and has gotten a seal of approval from the governor and the state legislature. HB 56, the state’s increasingly infamous anti-immigrant law, went into effect on June 9, 2011, and has since inspired all manner of bias aimed at Latino residents of the state. Stories abound of police pulling over and harassing Latino drivers for no justifiable reason; cashiers demanding proof of legal status before they will take the money of Latino customers; white shoppers telling brown-skinned shoppers to “go back to Mexico.” In short, more and more self-appointed defenders of the nation’s immigration laws are degrading and dehumanizing their fellow Alabamans. In the process, they are dehumanizing themselves as well.

The breadth and depth of this discrimination are explored in the report, entitled Racial Profiling After HB 56. The report summarizes and analyzes more than 6,000 calls received by a statewide hotline that civil rights organizations established so that people could report the civil rights violations which were so obviously going to occur in the wake of the law’s enactment. And there were civil rights violations aplenty. In fact, the report says that the calls to the hotline revealed “three dangerous trends” in Alabama following implementation of the law:

The incidents captured by the report run the gamut of injustice and indignity. Police called to investigate a possible crime and instead choosing to question the caller about his immigration status. Bosses who don’t pay workers what they are owed and threaten to have them deported if they complain. Health centers turning people away if they can’t prove their lawful presence in the country. Men and women walking or driving along the street, stopped by police and asked to present their “papers,” as the officers taunt them with threats of being “sent back to Mexico.”

As the report concludes, the results of the anti-Latino sentiments unleashed and nourished by HB 56 are tragic:

“More people are afraid to go about the everyday activities that are basic to normal life, because they or people about whom they know have been targeted and tracked by police officers intent on being immigration enforcers, and because they’ve been harassed or subjected to intimidation by cashiers, land-lords, clerks, fellow customers, classmates, teachers, and passersby. Ultimately, the result is an increasingly fractured, less safe community in which people mistrust each other and, unfortunately, have better reason than they did before to distrust even the public servants who have sworn to protect and serve them.”

Alabama’s HB 56 is cruel. It is pointless. It is a national embarrassment.