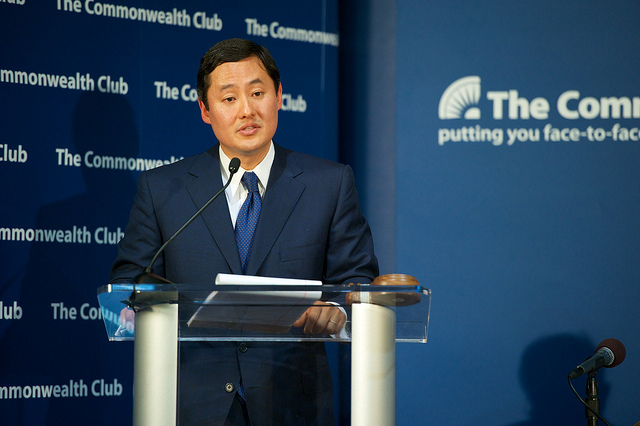 As a high-ranking Justice Department attorney after 9/11, John Yoo authored an infamous legal memo arguing that the President, as commander-in-chief of the armed forces, possessed irrevocable authority to order the torture of alleged “enemy combatants.” Although the memos were subsequently revoked, Yoo has remained an ardent defender of presidential power—except, it appears, when it comes to the exercise of prosecutorial discretion for undocumented immigrants.

In a working paper released earlier this month, Yoo, now a law professor at the University of California, argues that by offering deferred action to immigrants who would have benefitted from passage of the DREAM Act, the President has abandoned his constitutional responsibility to enforce the laws. Specifically, Yoo contends that the Deferred Action for Childhood Arrivals (DACA) initiative is such a broad application of prosecutorial discretion as to  be incompatible with the constitutional requirement that the President “take care that the laws be faithfully executed.”

Of course, Yoo is not the first critic of the President to challenge the legality of DACA. Rep. Steve King (R-Iowa) has repeatedly vowed to bring litigation over the initiative, and Kris Kobach, the Kansas Secretary of State and author of Arizona’s SB 1070, filed a complaint in federal court on behalf of ICE agents who oppose the program. Yet like King’s and Kobach’s claims, Yoo’s paper betrays a basic unfamiliarity with federal immigration law and policy.

For one thing, Yoo equates deferred action with the DREAM Act itself, which would put beneficiaries on a path to U.S. citizenship. By contrast, recipients of deferred action gain no lawful immigration status, and remain subject to enforcement action at any time. Moreover, contrary to Yoo’s assumption that the immigration laws mandate the initiation of  removal proceedings in every possible case, the Supreme Court has repeatedly confirmed that the decision to grant deferred action neither requires approval from Congress nor is subject to challenge in federal courts. Finally, Yoo falsely states that the processing of deferred action requests will be handled by ICE, an agency funded by taxpayers, rather than USCIS, an agency funded almost entirely by immigrants’ fees.

Beyond factual and legal misstatements, Yoo’s article also omits abundant evidence demonstrating that immigration enforcement has increased during the Obama administration. For example, nowhere does the article mention that the government has carried out more deportations on an annual basis since the President took office than ever before in U.S. history. Or that ICE detained a record number of immigrants during the most recent fiscal year. Or that the backlog of cases before immigration judges currently exceeds 320,000.

To be sure, supporters of the DACA initiative do not deny that it represents a broad if not unprecedented exercise of prosecutorial discretion. But only hardened ideologues—such as King, Kobach, and now Yoo—have argued that DACA itself violates the law or the Constitution. As we have previously explained, these claims are nothing more than political sour grapes with little to no chance of surviving in court. Although the allegations may seem significant, they are based on nothing more than tortured logic.