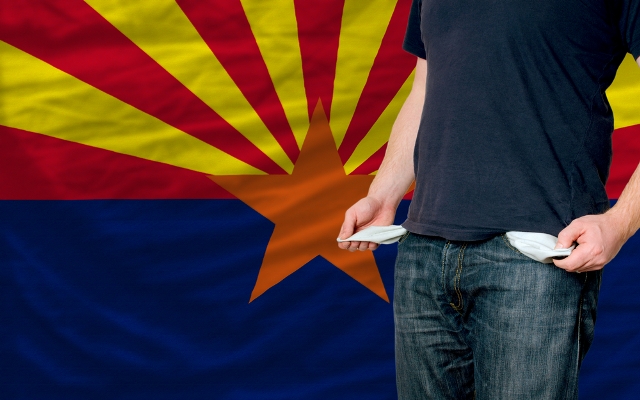 Faced with a battered, post-recession economy, lawmakers in Arizona adopted a unique approach to fostering economic recovery; they passed a law that beat down or drove out tens of thousands of the state’s workers, consumers, and taxpayers. The rationale for this counterintuitive action was that the workers, consumers, and taxpayers in question were unauthorized immigrants, and therefore undeserving of support. Some of Arizona’s lawmakers even thought that an exodus of unauthorized immigrants from the state would magically create job openings for unemployed natives. But that’s not how an economy actually works. The unsurprising end result of the attack on unauthorized immigrants has not been recovery, but the shrinking of a state economy that was already contracting.

This bitter dynamic is summarized well in a comprehensive survey of the available evidence by the CATO Institute. CATO found that Arizona’s two punitive immigration laws—the 2007 Legal Arizona Workers Act (LAWA) and the 2010 Support Our Law Enforcement and Safe Neighborhoods Act (SB 1070)—have inflicted serious damage on the state’s economy. Specifically, “LAWA’s mandate of E-Verify, a federal electronic employee verification system, and the ‘business death penalty,’ which revokes business licenses for businesses that repeatedly hire unauthorized workers, raise the costs of hiring all employees and create regulatory uncertainty for employers.” As a result, “employers scale back legal hiring, move out of Arizona, or turn to the informal economy to eliminate a paper trail.” On top of that, “SB 1070’s enforcement policies outside of the workplace drove many unauthorized immigrants from the state, lowered the state’s population, hobbled the labor market, accelerated residential property price declines, and exacerbated the Great Recession in Arizona.”

According to the CATO report, “Arizona-style laws are economically destructive and inimical to growth.” That is because “the unauthorized immigrants who left the state took their businesses, money, and spending power with them, which reduced demand for the goods and services that unauthorized immigrants purchased in the state.” Moreover, “Arizona’s immigration laws drove thousands of renters and homeowners from the state, putting downward pressure on residential real-estate prices in the midst of a housing price collapse.”

These findings echo those of a 2011 study from the Center for American Progress (CAP), which estimated that if SB 1070 were successful in its objective of removing all unauthorized immigrants from the state, Arizona would lose $29.5 billion in labor income, $4.2 billion in tax revenues, and 581,000 jobs. Why? Because “when undocumented workers are taken out of the economy, the jobs they support through their labor, consumption, and tax payments disappear as well.” In short, argues the CAP study, the “economic dislocation envisioned by S.B. 1070-type policies runs directly counter to the interests of our nation as we continue to struggle to distance ourselves from the ravages of the Great Recession.”

Unfortunately, lawmakers in Arizona (and Alabama and Mississippi) don’t seem to understand this.