Immigration (Finally) Takes the Stage at a Presidential Debate 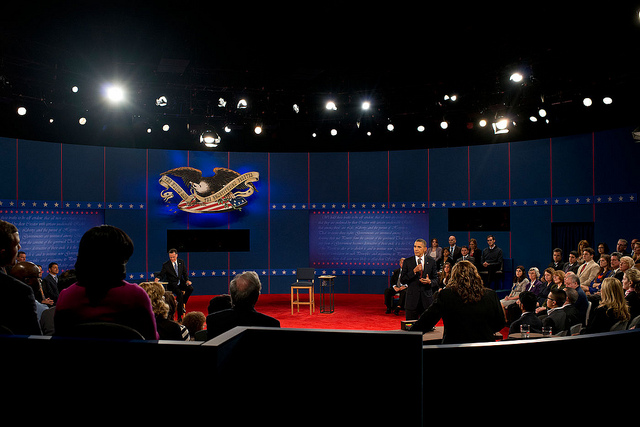 George W. Bush made several appearances in last night’s presidential debate, but perhaps nowhere with greater effect than when President Obama contrasted Governor Mitt Romney’s position on immigration reform.  Where President Bush supported comprehensive immigration reform, declared President Obama, Governor Romney supports “self-deportation” and Arizona style anti-immigrant laws.  Moderator Candy Crowley then segued into a direct immigration question from an undecided voter about Romney’s plans for dealing with the 11 million undocumented immigrants living in our nation.  The next few minutes revealed a great deal about both candidates’ positions on the immigration question, but perhaps more importantly, the points where the candidates challenged each other suggest that both parties recognize they must begin talking about immigration in new ways.

In short, Governor Romney expressed his support for keeping highly skilled immigrants in the U.S., the electronic employment verification system, E-verify,  and   helping young people who are undocumented become permanent residents if they serve in the military.  He said he opposes “amnesty,” and thinks self-deportation is better than mass deportation because it gives people a “choice.”  He offered nothing new in terms of a plan for immigration reform, but repeatedly returned to the fact that President Obama failed to meet his campaign pledge of introducing a bill in 2009.

President Obama found a way to reduce the criticism in one sentence: “This used to be a bipartisan issue.”  President Obama didn’t apologize for delays in passing immigration reform, focusing instead on what his administration had accomplished, as well as his belief that immigration was an important economic and cultural force.   He personalized the issue by tying Governor Romney to Kris Kobach, the architect of many anti-immigrant laws that passed around the country, including Arizona’s SB 1070, that have been successfully challenged in court.   The President even noted that Arizona-style laws could put his own daughters at risk.

It’s hardly surprising that Governor Romney went after the President on his broken campaign promise, as many immigration advocates, and the Latino community more broadly have expressed dismay about the administration’s initial hesitance to push harder for reform.  But recent developments, especially the Deferred Action for Childhood Arrivals initiative, have increased support for President Obama among Latinos and have given immigration advocates something positive to point to.  Of course, many people continue to criticize the president on this issue, but by stressing the failure of a bipartisan system, the President was able to deflect his own role in the game.

The choice to use civil rights laced language to discuss immigration was also smart and strategic.  One of the biggest miscalculations of the anti-immigrant movement has been the degree to which they pushed the envelope in states like Arizona and Alabama on civil rights in the immigration context.  That President Obama felt comfortable saying his own daughters could be at risk says a great deal about how much closer the traditional civil rights community and the immigrant advocacy community have become in the years since the last Presidential election.  Similarly, that Governor Romney didn’t feel that he could talk at length about protecting our borders or even endorse the Arizona laws, suggests that the anti-immigrant rhetoric of the primary campaign doesn’t work in a general election.

As with most issues in the debate, each candidate’s supporters probably heard what they wanted to hear and judged accordingly.  The fact that President Obama was able to lean into the immigration issue by invoking George Bush and bi-partisanship, however, suggests he and his advisors calculated that the public was tired of the blame game when it comes to immigration.  And since blame was exactly what Governor Romney was prepared to lay on the President, he couldn’t shift quickly or easily enough to something more proactive.

Let’s hope that this is a lesson for the coming Congress.  Blame and punishment don’t work anymore when talking about immigration.  Instead, solutions are in vogue again.