A Clash of Conservatives in Kansas 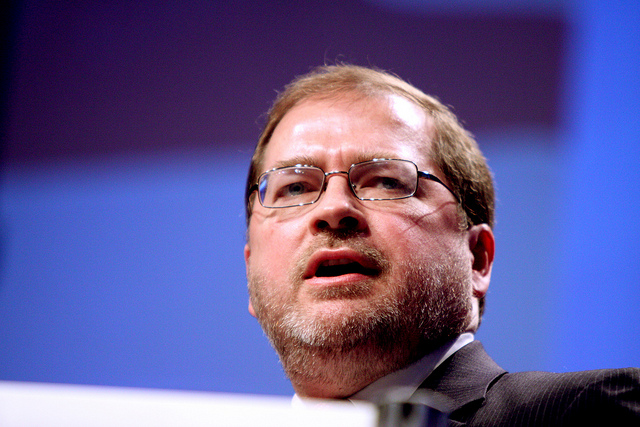 Anti-tax crusader Grover Norquist came to Topeka this week to serve as a counterweight to Kansas Secretary of State Kris Kobach in the national debate over immigration reform. Norquist, the president of Americans for Tax Reform, is best known for persuading congressional Republicans to sign his anti-tax pledge. However, he is also an opponent of restrictive and punitive immigration policies. Kobach, on the other hand, has used his perch as Kansas Secretary of State to travel the country touting the evils of unauthorized immigration and drafting various and sundry state laws that crack down on anyone who looks like an unauthorized immigrant.

“We are bringing Mr. Norquist to Kansas so legislators can hear what real immigration reform should look like. Each year, the business coalition has been forced to oppose harmful, anti-business legislation pushed as the only solution to this country’s and Kansas’ immigration woes. Mr. Norquist’s insight will give lawmakers a fresh perspective into what direction this country should head as it searches for a solution to the broken and inefficient immigration system.”

Norquist, for his part, is as emphatic in his support of immigration as he is in his opposition to tax increases. During the keynote speech at the Midwest Summit last October, Norquist said this of immigration reform:

“It’s the most important thing to focus on if you’re concerned about the future of the country both as an economic power and as a serious leader of the world, or simply as a successful society. It’s not only good policy to have more immigrants in the United States—dramatically more immigrants than we do today, to having a path forward for those people who are here. It’s not only a good idea, but it’s good politics.”

Kobach begs to differ. His argument against creating a pathway to legal status for unauthorized immigrants is both simple and simplistic: “You’re basically giving citizenship to people who will be a fiscal drag on the economy.” This is false. As studies in California and Texas have demonstrated, legalizing unauthorized immigrants puts more workers on the tax rolls and therefore increases revenue to local, state, and federal governments. Moreover, legalized immigrants earn higher wages, so they spend more in local businesses, which supports more jobs. In short, there is no economic downside to legalizing immigrants who are already here.

Mr. Norquist’s appearance in Kansas sends the message that immigration reform is not the exclusive domain of liberals. It is also a common-sense, fiscally sound position that conservatives can, and should, support. Smart conservatives will resist the siren song of Mr. Kobach.