President Lays Out His Vision For Immigration Reform 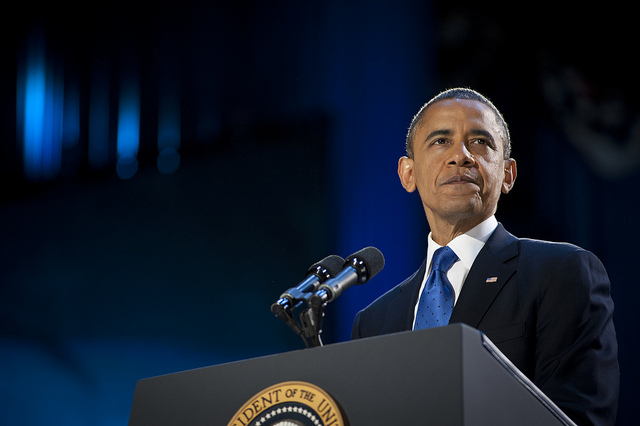 After eight Republican and Democratic senators yesterday released their framework for comprehensive immigration reform, President Obama laid out his administration’s vision today of what he thinks should be included in the bill to overhaul the nation’s immigration system. He praised the bipartisan principles, which mirror the White House’s 2011 blueprint for immigration reform. “At this moment, it looks like there’s a genuine desire to get this done soon,” he said in his speech from Nevada. “And that’s very encouraging.”

As one of his four principles of immigration reform, the president called for improvements to the nation’s immigration system because it no longer “reflects the realities of our time.” Similar to the “legislative pillars” outlined by Democratic Sens. Chuck Schumer (NY), Dick Durbin (IL), Bob Menendez (NJ) and GOP Sens. John McCain (AZ) and Marco Rubio (FL) at a press conference yesterday, Obama wants to help foreign entrepreneurs and students. He said it should be easier for foreign students who want to study technology or science and entrepreneurs who want to start business to come to the U.S. “We should help you do that here, because if you succeed, you’ll create American businesses,” he added. And Obama wants to eliminate the waiting list for family-sponsored visas. “If you are a citizen, you shouldn’t have to wait years for your family to join you in America,” he said.

Obama also went further than the senators’ bipartisan principles. While the Senate framework creates a path to citizenship for the 11 million unauthorized immigrants currently living in the United States, in their proposal implementation is “contingent upon our success in securing our borders and addressing visa overstays.” The provision does not clarify how much enforcement will be enough, and Obama made it clear that he would not endorse such a plan. He repeated the call for a straightforward route through which unauthorized immigrants can obtain citizenship. “For comprehensive immigration reform to work, it must be clear from the outset that there is a pathway to citizenship,” Obama said during his speech.

The President proposal includes other differences.  There is a focus on combating transnational criminal organizations and on those who prey on vulnerable immigrants through notario fraud.  He has more detailed proposals on start-up and investor visas.  There is recognition that the immigration court system is in dire need of reform, and that judicial review is an essential part of the American legal system.  The President also makes it clear that his definition of family is inclusive of same-sex couples, and that he would better address humanitarian concerns.  These are important differences and they should be seen as a tool for expanding the debate rather than be used as a tool to derail it.

During his speech, Obama pointed out that what he was suggesting was not that different than what former Sen. Ted Kennedy (MA) and former President George W. Bush supported in 2007. And it is very close to the Senate’s starting point for an immigration reform bill. The bipartisan principles are clear on immigration reform, but if Congress does not move forward on immigration quickly, Obama said, “I will send up a bill based on my proposal and insist that they vote on it right away.”

Hopefully, the Senate will act quickly to introduce a bill based on the ideas put forward by a bipartisan group yesterday. And now that the president and Senate immigration leaders are on the same page, the plans that Obama and the bipartisan group of Senators have laid out should go far to fix the nation’s immigration system.