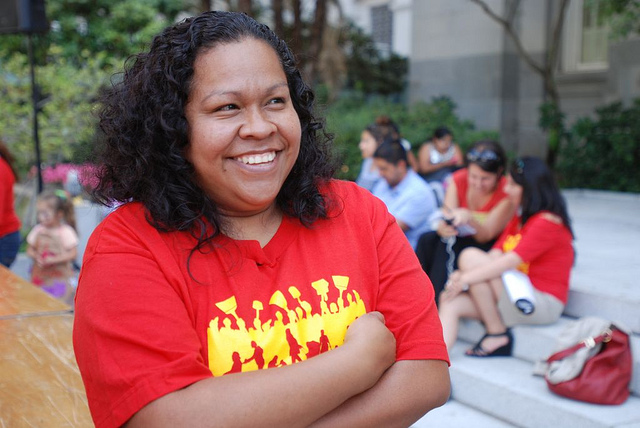 On September 26, Gov. Jerry Brown signed into law the California Domestic Workers Bill of Rights (AB241). Only the third state-level measure of its kind in the country after New York and Hawaii passed their own bills, the Bill of Rights represents an historic milestone for domestic workers and advocacy groups seeking social justice for one of our most vulnerable—yet vital—workforces. The victory is also a triumph of the immigrant rights movement in securing basic labor protections for a group of individuals—in particular, immigrant women—who are often isolated and at risk for multiple forms of exploitation.

Under the California measure, domestic workers are entitled to overtime pay if they work for more than 9 hours a day or 45 hours a week. Less expansive in its safeguards than the original proposal, the law excludes other needed protections such as daily meal and rest breaks, and adequate sleeping accommodations, among others. Still, the Domestic Workers Bill of Rights symbolizes a significant success for a sector that does not enjoy the same protections as others; current law explicitly denies domestic workers protections from key labor and employment laws and standards, such as the National Labor Relations Act.

Various estimates show that in the U.S. at large, domestic workers are overwhelmingly women of racial and ethnic minorities, and they are immigrants to a large extent. Although data from the American Community Survey indicate that 46 percent of domestic workers are foreign-born, many studies show that the actual proportion is much higher. Because this segment of the workforce is composed of large numbers of undocumented workers, the overall number of domestic workers—the ones who are foreign-born in particular—are likely undercounted by the Census Bureau.

One of the merits of the governor signing the California bill into law resides in the visibility and recognition it brings to a critical segment of the immigrant workforce as Congress debates immigration reform. While there seems to be some consensus in political milieus regarding the need for a more rational regulation of immigrant visas for STEM and agriculture workers, the various legislative proposals currently under discussion have not seriously addressed the country’s need for domestic workers.

If a pathway to citizenship were offered for undocumented workers currently living in the country, the living and work conditions of many undocumented immigrant domestic workers would improve tremendously. These workers would become more mobile, would be more likely to report abuses and discrimination at the workplace, and would have greater employment options. At the same time, a pathway to citizenship for domestic workers would also bring peace of mind to the families who employ them. As advocate Ai-Jen Poo asserts, “They will no longer have to worry that at any moment, their nanny, housekeeper or caregiver could be picked up and deported.”

The prospects for future immigration, however, appear less promising. The most comprehensive reform proposal to date—namely, the bipartisan Senate Bill S. 744—does little to improve the opportunities for future immigration of domestic workers through legal channels. Under the Senate bill, the new workers program (W visa) would probably be the most natural channel through which domestic workers would be able to immigrate legally into the United States. However, given the types of requirements the system imposes on employers, it is improbable that small employers or families would be able to make use of this system. That said, some of the principles that guide the W visa program constitute a significant leap forward. These principles include that (a) those admitted under the W visa would be able to change employers, and (b) workers in W status may eventually be eligible to apply for a green card, marking the first time that such less-skilled nonimmigrant workers would be allowed to transition to permanent resident status without an employer’s sponsorship.

As the political discussion unfolds in the House, it is crucial to keep in mind that the country’s economy needs workers at all skill levels, and domestic workers are and will continue to be a vital part of our economy. With a dramatically aging population, the country’s demand for direct care workers alone is expected to keep growing. It would be wise for lawmakers to recognize and address the anticipated need for immigrant homecare workers as well as their rights and dignity when reaching an agreement on the various components of the new immigration system.