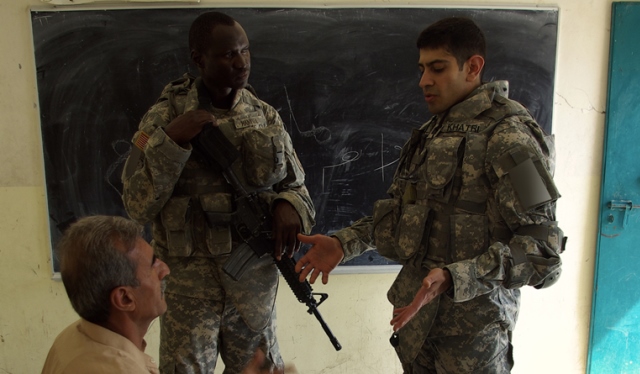 On October 4th, with little fanfare, President Obama signed into law an extension of a popular special immigrant visa program for Iraqi translators/interpreters. The law, which passed unanimously out of both the House and the Senate, extends the program, which expired on September 30, until the end of 2013. This rare agreement in the midst of the shutdown stalemate is a reminder that many immigration issues—particularly humanitarian protections—are fundamentally bipartisan.

The visa program itself was created under the National Defense Authorization Act of 2008, which authorized the Department of State to issue Special Immigrant Visas (SIVs) for Iraqi nationals who had been translators or interpreters for the U.S. Armed Forces or for the U.S. Embassy (not as contractors). There are similar yet distinct Special Immigrant Visa programs for Afghani translators/interpreters and for Iraqi/Afghani nationals who worked for or on behalf of the United States government. Under the National Defense Authorization Act, SIVs for Iraqi translators were capped at 25,000, but only 20 percent of this amount have been given out to date. Prior to the sunset of the program, there was already significant backlog. Rights organizations have attributed the backlog “to the complexity of the SIV application process and the time it takes to clear each bureaucratic stage.”

Despite the program backlog and delay in its renewal, the Congressional support for the SIV program is widespread. Earlier this spring, nineteen Congressmen from both political parties wrote to the President about the pending expiration of the program. Rep. Jim McDermott (D-WA) also wrote to Secretary of State John Kerry and Director of National Intelligence James Clapper, Jr. expressing concern about the situation of an Iraqi translator’s visa application after First Lieutenant Matt Zeller wrote an op-ed in The Guardian. Zeller’s op-ed, McDermott’s letter, and the countless military officials that Sen. Jeanne Shaheen (D-H) cited in her floor speech highlights the significance of the SIV program to foreign and military policy. As Rep. Earl Blumenauer (D-OR) stated, “If we want foreign nationals to help us in the future, and risk their lives to help our troops, they need to see that we have kept our commitments to our allies in Iraq and Afghanistan.” It would not be good foreign policy to not follow through on promises made to foreign nationals who worked alongside and at times saved the lives of our military in wartime. There is precedent for visa programs to support these foreign nationals who assisted us previous foreign wars, including the Vietnam War.

Unfortunately, the delayed renewal of this program and its short extension highlights the typical Congressional reluctance to expand visas even for a program that helps foreign nationals endangered by their relationship with the United States. For this SIV program, at least, this has started to change. The Senate voted to renew the program three times this year in its comprehensive immigration bill, in the National Defense Authorization Act, and in the State Department appropriations bill, but none of these bills made it through the House to be signed into law before the deadline. The critical timing issues in the Iraqi translator program highlight the importance of taking a much longer view of immigration legislation. Without a system that is flexible, and adapts quickly to changes in both foreign policy and migration demands, we are constantly playing catch up and putting lives at risk in the process. These deadlines are reminders of the need to move forward on systematic reform, so that lives aren’t held in the balance of Congressional gridlock.