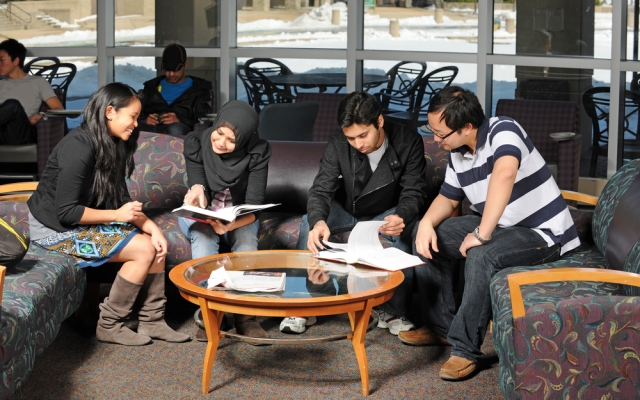 This is the third consecutive year that the Open Doors Report has shown a significant jump, and after a decrease following the Sept. 11, 2001, terrorist attacks, there are 40 percent more international students studying in the U.S. compared to a decade ago. “A student from virtually any country can find an opportunity to study in the US,” Allan Goodman, president and CEO of IIE, told the Christian Science Monitor. “The diversity of who comes to America continues to be inspiring and impressive.” The top 25 countries of origin for international students—including Brazil, Kuwait, Mexico, Nigeria, and Spain, to name a few—send 5,000 or more students to the U.S.

And the students coming to the U.S. are studying across the nation. California, New York, Massachusetts, Texas, and Pennsylvania saw the largest boost from international students and their families from spending on living expenses, tuition, and fees. NAFSA found that three U.S. jobs are created or supported for every seven enrolled international students. These jobs are in higher education, accommodation, dining, retail, transportation, telecommunications, and health insurance. In House Speaker John Boehner’s district alone, NAFSA’s analysis shows that 1,275 international students contributed $45.8 million to the local economy and supported 718 jobs.

But without immigration reform to help remove limits that stop some students from being able to study in the U.S. or remain here after they finish their degrees, the U.S. is missing out on enormous benefits, according to NAFSA Executive Director Marlene Johnson. “These data clearly show the tremendous economic opportunity costs we face unless the House acts decisively to break down barriers for the best and the brightest international students and scholars to come here,” Johnson said. Beyond the economic boost from having more international students in the U.S., they also bring incalculable academic and cultural value to U.S. colleges, universities, and communities. As NAFSA explains, “International students build bridges between the United States and other countries, bring global perspectives into U.S. classrooms and research labs, and support U.S. innovation through science and engineering coursework.”