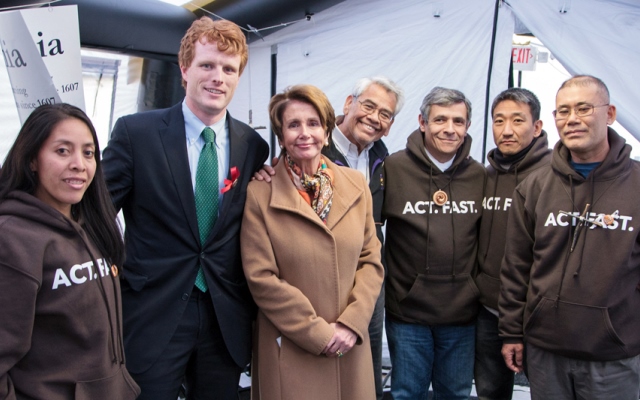 On the National Mall today, the four core fasters leading the “Fast 4 Families” ordained new fasters and ended their 22–day, water-only fast. Members of Congress, the faith community and civil and immigrant rights groups turned out to witness the four fasters passing the baton over to others who will continue the fast until House Speaker John Boehner schedules a vote on immigration reform.

Labor Secretary Thomas Perez and House members Nancy Pelosi, Steny Hoyer, Keith Ellison, Zoe Lofgren, Luis Gutierrez, Judy Chu, Sheila Jackson Lee and other congressional representatives filled the tent across the street from the U.S. Capitol  to witness not only the new fasters explain why they were joining in, but to listen to Martin Luther King’s daughter, the Reverend Bernice King explain why immigration reform is no longer an issue for just immigrants or Latinos, but rather for all of God’s children.

King said, “For America to continue to be a first class nation, we cannot have second class citizens.” She also directed comments at Speaker Boehner noting, “To our brother Mr. Boehner, Representative Boehner, the best time is now.” King added, “The right time is now, the correct time is now, and the only time is now.”

Jim Wallis, the founder of Sojourners explained his reason for joining the fast and told the crowd that “this is a spiritual fast…we have a broken immigration system and broken political system…this is spiritual warfare.” And Wallis said they “must go deeper than politics…we must go deeper through prayer and fasting.”

New fasters Phillip Agnew and Ciara Thomas of the Dream Defenders noted that they were not immigrants, but as African-Americans, they had unique insight into the plight of immigrant families and what it feels like to be concerned about a family member being locked up and unfairly targeted as a criminal. They urged other social justice activists to join them.

While the four core fasters have been the focal point of the national press, and have been visited by the president, first lady, vice president, and countless other high-profile politicians and activists, thousands of people have joined the Fast 4 Families from around the country and will continue to do so over the coming days and weeks.

As Medina, Yoong, Avila and Harper ended their 22-day journey, they promised a return to the fight. “While we end our personal fast, the battle for reform goes on. We will take 1 to 2 days to regain our strength and we will return to the tent and continue our fight for a path to citizenship for 11 million immigrants in our country,” the original core fasters said in a statement. “Today, we pass the ‘Fast for Families’ on to dedicated advocates for immigration reform who will carry on our movement. We offer our support and encouragement as they move to the next phase of our fast.”

Photo Courtesy of the Fast 4 Families.