From the Mouths of Babes: Children Demand Immigration Reform 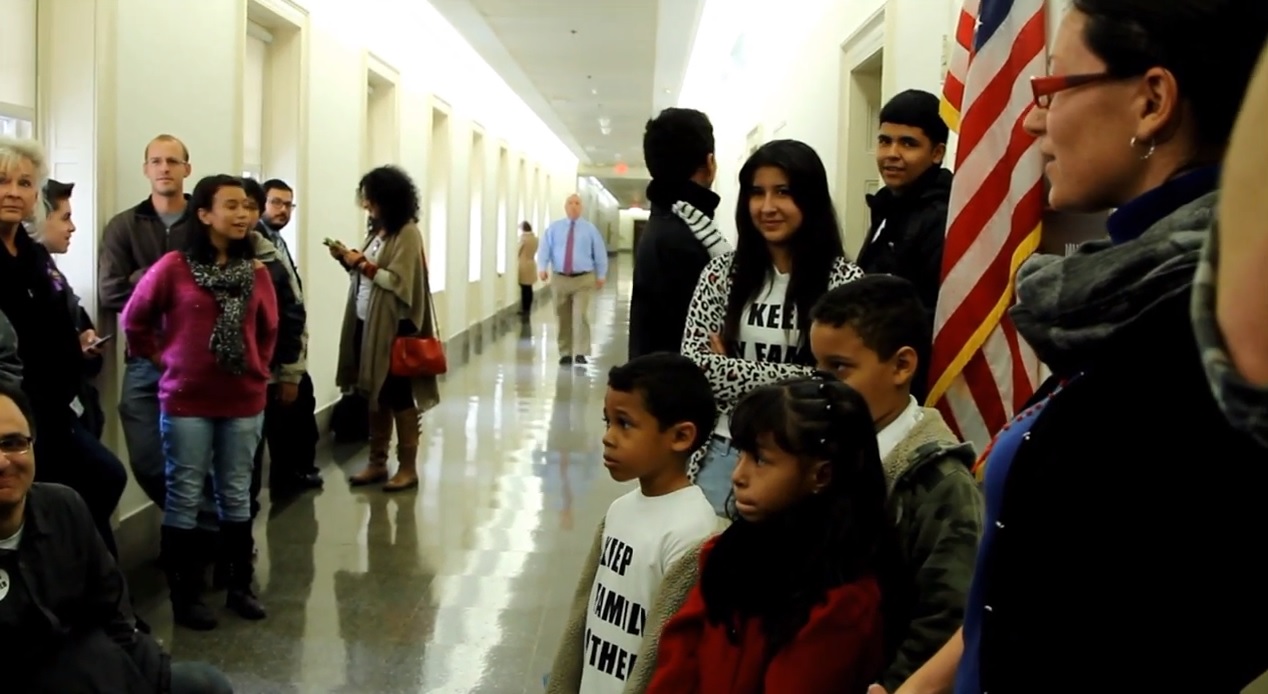 Families across the U.S. are facing the holidays separated from mothers, fathers, and siblings due to deportations and years-long waits for visas. Children—some of whose parents are undocumented immigrants—have taken to the halls of Congress this week to go to congressional offices, meet with members, and ask them to support immigration reform so that their families won’t be separated.

The protests and meetings are part of the Fair Immigration Reform Movement’s (FIRM) Youth in Action campaign to bring children to Washington, D.C. to share their stories. Eleven-year-old Esteban Verdugo told Rep. Scott Tipton (R-CO), for example, that the holidays are hard for him since his father was deported. “I’m scared that my stepdad could be next. It’s Christmas time and while most families are together, immigrant families like mine continue to be separated,” Verdugo said, according to FIRM. “We need to pass immigration reform now.”

Along with meeting with members, they have gathered in front of House Speaker John Boehner’s office to ask him to bring an immigration bill to the floor for a vote. According to the Huffington Post, a Capitol police officer yelled at the children and advocates Thursday for singing in hallway outside of Boehner’s office:

“Comprende?” he asked, raising his voice.

On Wednesday, the children and their families also staged a protest during the Capitol Christmas tree’s lighting. They held pictures of family members and signs asking for “Immigration reform now!” and chanted, “All I want for Christmas is reform,” as Boehner began the tree lighting ceremony. And in November, two immigrant teenagers—Carmen Lima, 13, and Jennifer Martinez, 16—approached Boehner at a diner as he was eating breakfast to explain how their parents were at risk of deportation because of the House’s inaction on immigration reform. After Lima asked the speaker to support immigration reform, he said, “I’m trying to find a way to get this thing done. It’s, as you know, not easy. It’s not going to be an easy path forward, but I’ve made it clear since the day after the election that it’s time to get this done.”

Despite telling the two teenagers in November that he’s trying to work on immigration reform, Boehner also has insisted the House has no intention of taking up S. 744, the immigration bill the Senate already passed with a wide majority. And while House Republicans delay on putting forward a plan or considering one of the immigration measures languishing in committee, the children’s stories highlight the growing number of families who are hurt by the wait for immigration reform. That is why 29 House members sent a letter to President Obama this week asking him to use his authority to suspend deportations of people who would qualify for a path to citizenship under pending immigration reform legislation. “Our efforts in Congress will only be helped by the sensible and moral step of stopping deportations,” the letter states. “We cannot continue to witness potential citizens in our districts go through the anguish of deportation when legalization could be just around the corner for them.”