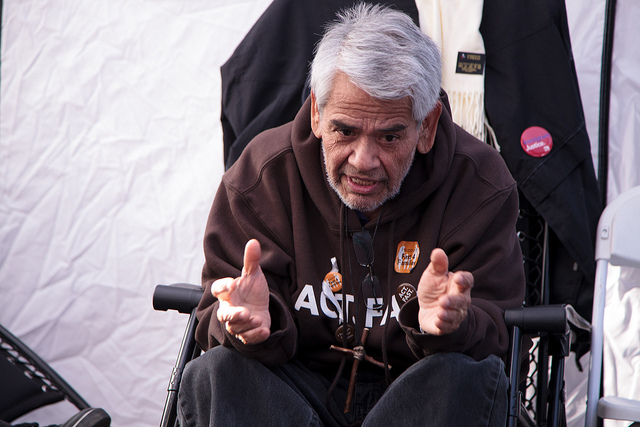 Congress takes a holiday break at the end of this week and won’t return from recess until January. This pause in the legislative calendar, however, has little meaning for immigration activists who are continuing to push Congress to act on immigration reform. While the timetable may be changing, the commitment to work for reform has not, as evidenced by the tremendous support garnered by the Fast for Families campaign.

The growing suffering of immigrant families, not the legislative timetable, continues to drive many activists. Eliseo Medina, a labor leader who fasted for more than three weeks to push the House to act, said House Speaker John Boehner could bring up the immigration bills at any time. “Our campaign has not been driven by the legislative calendar, it has been driven by the urgency of the issue,” Medina told The Hill. Medina and three other fasters spent their days in a big tent across the street from the Capitol while going without food until the House voted on immigration reform. They broke their fasts and handed the effort to seven new fasters last week, including Rep. Joe Kennedy (D-MA), who fasted for 24 hours before passing it to another member of Congress.

The activists with the Fast for Families are one of the most visible signs of ongoing immigration advocacy. Medina told the Washington Post that their fast “created a moment in which the public is focused on the problems of this broken immigration system.” For example, the president, first lady, vice president, cabinet secretaries, and members of Congress visited the fasters to hear their stories and talk about the need for immigration reform. And a table in the Fast for Families tent has items like a shoe of a migrant found in the Arizona desert that serve as reminders of those who died trying to cross into the U.S. or who have been deported and separated from their families.

Despite this urgency, whether or not the House turns to reform in January may turn on successful resolution of the next round of budget talks. Budget fights have taken the spotlight from immigration in the House, according to The Hill, so if the House and Senate strike a budget deal before the end of December, it will help clear the calendar for House members to consider immigration bills next year. Current federal funding runs through January 15.

But because budget battles have become a fact of life in Washington, the tired excuse that immigration reform will have to wait until budget issues are resolved is unlikely to play well with the public. The House will not be heading into 2014 with a clean slate, but instead will have the reminder that it failed to make progress on immigration reform in 2013 hanging over its head.  Understandably, people will say, the Senate has acted, and now the House must, too.