How the 2014 Midterm Elections Could be Impacted by Immigration 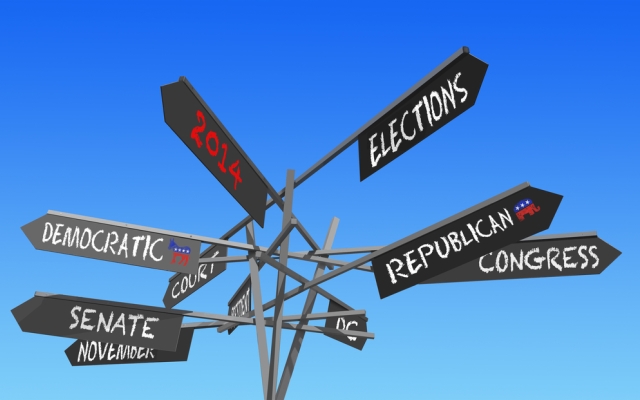 After the passage of S.744 in the Senate, reform advocates stepped up their pressure on a number of key Republican Representatives. Last spring, I created statistical models to forecast legislative support and opposition to a comprehensive immigration reform bill that included a path to citizenship. Three months prior to the Senate vote on S.744, my analyses suggested that 67 Senators would vote “yea.” I was off by 1 vote. My analyses for the House, on the other hand, suggested that only 203 Representatives would vote “yea,” which is 15 votes shy of a majority in the 435-member chamber. Showing Republican support for comprehensive immigration reform has thus been one of the strategies advocates have used to convince leadership in the GOP-controlled House to bring S.744 up for a vote. By some counts, as many as 29 Republican Representatives now support a path to citizenship.

But while the votes may very well be there, the political will to bring S.744 up for a vote in the House has not been. Speaker of the House John Boehner has been steadfast in his position that immigration reform legislation should be taken up in a step-by-step manner. Moreover, throughout all of 2013, Boehner continued to adhere to the so-called Hastert rule on the issue of immigration reform legislation – in short, nothing was going to be debated unless it had majority support among House Republicans. Recent events, however, have provided cause for optimism that this political dynamic may be changing. While the preference among Republicans to take a piecemeal approach remains, Boehner’s recent stand against the Tea Party faction within the GOP during the budget debate creates an opening, albeit a small one, for S.744 to survive in the House.

There are, however, some key races that may impact the future prospects of comprehensive immigration reform. First, Representative Steve King’s (R, IA-4) re-election race should be followed closely. King, perhaps more than any other person, has been the face of anti-reform efforts in the House. King won his seat in 2012 by only 7.9 points (30,593 votes). A successful re-election campaign by King will signal to other Republicans that being anti-immigrant is not political suicide. However, if King loses – and assuming that advocates can make the case that his hard-lined positions on immigration contributed to his loss – then this can go a long way towards propelling reform efforts forward after the midterm elections. Second, Representative Jeff Denham’s (R, CA-10) race is also an important one. In 2012, he won by only 5.4 points (11,331 votes). If he wins, and wins big, Denham and his public support for comprehensive immigration reform – he is one of three Republicans who have signed on as a co-sponsor of H.R. 15 – can be held up as an exemplar for other Republicans. Representative Gary Miller’s (R, CA-31) race is also an important one to watch. Miller has an A+ grade from NumbersUSA, a group that is staunchly opposed to reform efforts that include a path to citizenship. After the latest round of redistricting, Miller finds himself in a district that is overwhelmingly Hispanic/Latino and Asian. Lastly, three Republican Senators who voted for S. 744 are up for re-election in 2014. These are Lamar Alexander (R-TN), Susan Collins (R-ME), and Lindsey Graham (R-SC). Alexander and Graham, in particular, faced Tea Party criticism after the Senate vote. Their respective re-elections can serve to further marginalize the Tea Party on the issue of immigration in two traditionally red states.

One of the critical variables still to play out is the impact of the primary season on Republican choices to bring legislation to the table.  Pressure from within the party to move on immigration could accelerate action before the midterms —if legislation remains stalled, immigration is almost certain to play a significant role in the November elections.

Note: a longer version of this piece appears on the Center for Comparative Immigration Studies (CCIS) CIR Blog.