Are Immigrants Really Destined to Give the GOP the Cold Shoulder? 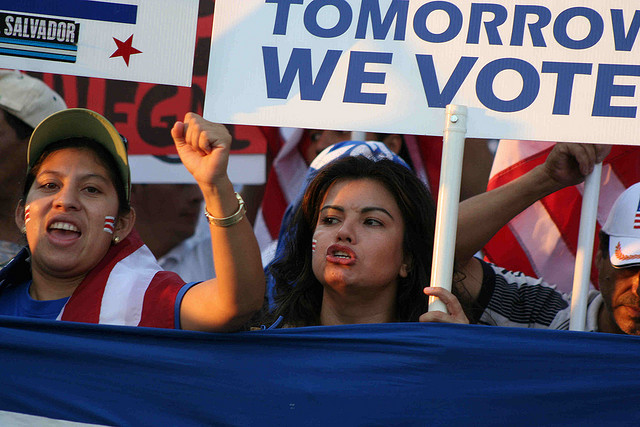 The latest catastrophic forecast on immigration policy comes in the form of a report released by the conservative Eagle Forum warning Republicans about the presumed dire impact that the arrival of new immigrants through legal channels will have on the GOP’s electoral future. While this idea is far from new, the report relies on assumptions that an overwhelming body of research has refuted. What emerges, as a result, is nothing more than a caricature of the future.

According to the report, Hispanics’ and Asian Americans’ views about capitalism, bigger government, publicly funded services, and “Obamacare,” among other policy issues, indicate that immigrant communities are more liberal than the average American voter. These liberal views, the authors argue, are shaped by the large role that the government has in most immigrants’ countries of origin, the actions of liberal elites in immigrant communities, the liberal environment that characterizes the communities where immigrants settle in the United States, and the fact that “many benefit from affirmative action and welfare.” Those liberal values and preferences “are sincerely felt [by the immigrant community] and not easily changed.” Consequently, the report urges conservatives not only to back away from any legalization program for the 11 million undocumented immigrants already in the country, but also to reduce the number of immigrants legally allowed into the country each year.

Such explanations are not only simplistic, but also scientifically false. Let’s break down the arguments and analyze them in detail. Basically, according to the report: (1) individuals’ values alone determine their party identification, (2) those values do not/will not change over time, (3) to a large extent, voters in immigrant communities constitute a monolithic block, and (4) because of immigration, the GOP is doomed to lose relevance in American politics. Not one of these premises is true.

Individuals’ political behaviors are not dependent on ideology alone.

A person’s political behavior (e.g., voter preferences or party identification) is shaped by the many circumstances that the individual confronts throughout life, not just values. In addition, party identification is a two-way communicative process that links voters, or potential voters, with political parties (e.g., how individuals respond to partisan messages). For example, studies have shown instances in which an anti-Latino political context can have a decisive impact on Latinos’ political behavior. Others have found certain targeted strategies used by Republican campaigns to reach out to Latinos have been more effective than others. The relationship between a political party and segments of the electorate depends on both sides of the equation, their interaction, and the surrounding circumstances (present and past).

Political identities are malleable and subject to contextual influences.

Party identification and voting behavior do not take place in a vacuum. Circumstances change, governments make choices that lead to certain results, politicians take initiatives that have an impact on their constituents, voters are members of groups that follow certain norms (and their own ethnic group is part of them). Those elements, and many others, affect people’s political behaviors. In other words, it is not possible to predict the results of future elections based on the demographic composition of the country alone.

The immigrant community is indeed diverse–not only ethnically, but also in their political behaviors.

For the most part, the report conveys the idea that immigrants tend to be more liberal, and consequently, the only solution to preserve the Republican Party is to put a halt to immigration. Not only is the immigrant community ethnically diverse but also, for years, the Republican Party has performed extremely well among immigrants from certain countries (e.g., Vietnam, Cuba). The fact that those traditional sources of support that the Republican Party relied on have eroded over time, is but an indication that party identification can change. Notably, the Latino vote was crucial in the election of President Bush in 2004.

Immigration policy provides the GOP with an invaluable opportunity to regain support among immigrant communities.

Reforming the U.S. immigration system in a way that is not only good for the economy, but that also honors core American values is an invaluable opportunity for Republican legislators to rebuild trust within the immigrant community. Many Republican congressmen and large swaths of the conservative world have understood this. In order to remain a relevant player in American politics, the Republican Party needs to recognize – rather than demonize – the value of the immigrant community.