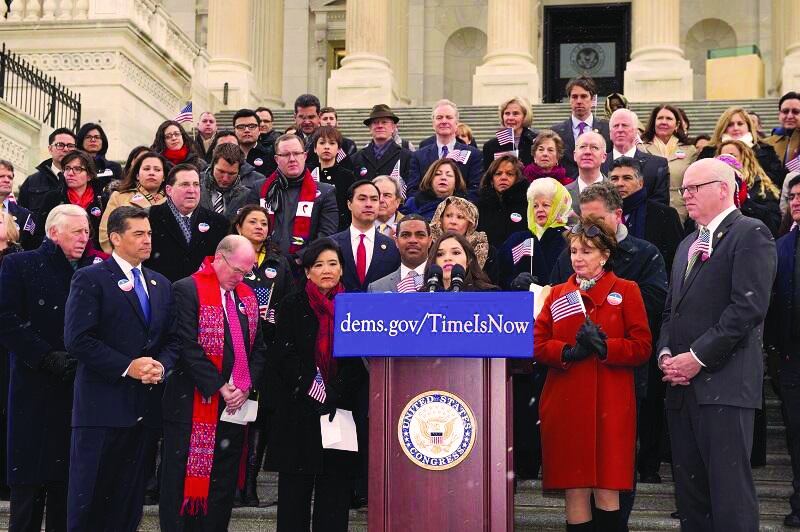 Ahead of the introduction of a discharge petition demanding a vote on HR 15, the Congressional Budget Office (CBO) on Tuesday issued its fiscal verdict on the immigration reform bill that has been languishing in the House of Representatives since October 2013. According to the CBO, the reforms called for in the bill would more than pay for themselves over the coming years—decreasing the federal budget deficit by just under $1 trillion during the next two decades—and would yield additional long-term benefits to the U.S. economy and U.S. workers. Yet the House leadership refuses to move on the bill, while nativist organizations are busy spreading misinformation about it.

CBO estimates this package of reforms would yield “a net reduction in federal budget deficits of about $200 billion over the 2015-2024 period.” During the second decade to follow, the bill would reduce the deficit on a scale very similar to that of the Senate immigration reform bill, S. 744, which the CBO previously estimated would be in the neighborhood of $700 billion. In addition, in scoring HR 15, the CBO noted that “the legislation would probably boost economic output, increase average wages for the entire labor force after about a decade (but decrease them before that), raise the amount of capital investment, and increase the productivity of labor and capital.”

Despite the bill’s positive economic impact, and the fact that the majority of the U.S. public favors immigration reform, the leadership of the House has chosen to sit on HR 15 rather than bring it to the floor. The discharge petition filed today on HR 15 is being dubbed a “give us a vote” petition. It is a procedural move requiring the signatures of 218 House members, which would force the House leadership to let a particular bill see the light of day. As Rep. Tony Cardenas (D-CA) explained on the House floor, “All we’re asking is that we have the opportunity to vote…on an issue that will unleash this economy.”

Anti-immigrants groups have already begun to attack the discharge petition on H.R. 15. For instance, NumbersUSA is claiming, among other things, that the bill would “increase unemployment and stagnate wages,” as well as “weaken border security.” These might be serious charges were they to contain a shred of truth. NumbersUSA seems oblivious to the conclusions of the CBO regarding the bill’s impact on deficit reduction, long-term wage growth, higher economic output, and greater productivity. Moreover, NumbersUSA is apparently unaware of the fact that HR 15 marries the immigration reform provisions of S. 744 with the border security provisions of HR 1417—the Border Security Results Act. That bill (and HR 15) contain the goals of “operational control” (a 90 percent deterrence rate) and 100 percent “situational awareness” along the entire southwest border. Implementing goals such as these would require a massive infusion of personnel and infrastructure throughout the entire border region. Justified or not, this would constitute a tremendous increase in border enforcement, not a “weakening” of anything.

It is telling that the opponents of immigration reform who yell the loudest seem to have the fewest practical ideas for how to fix the broken U.S. immigration system. Endless increases in immigration enforcement spending are all that the nativist lobby has to offer. Yet the majority of the U.S. public recognizes that genuine immigration reform is the only practical, humane, and economically sensible way to fix the broken immigration system. In deciding what to do with HR 15, the House leadership would do well to heed this public sentiment, not to mention the CBO’s latest fiscal estimates.