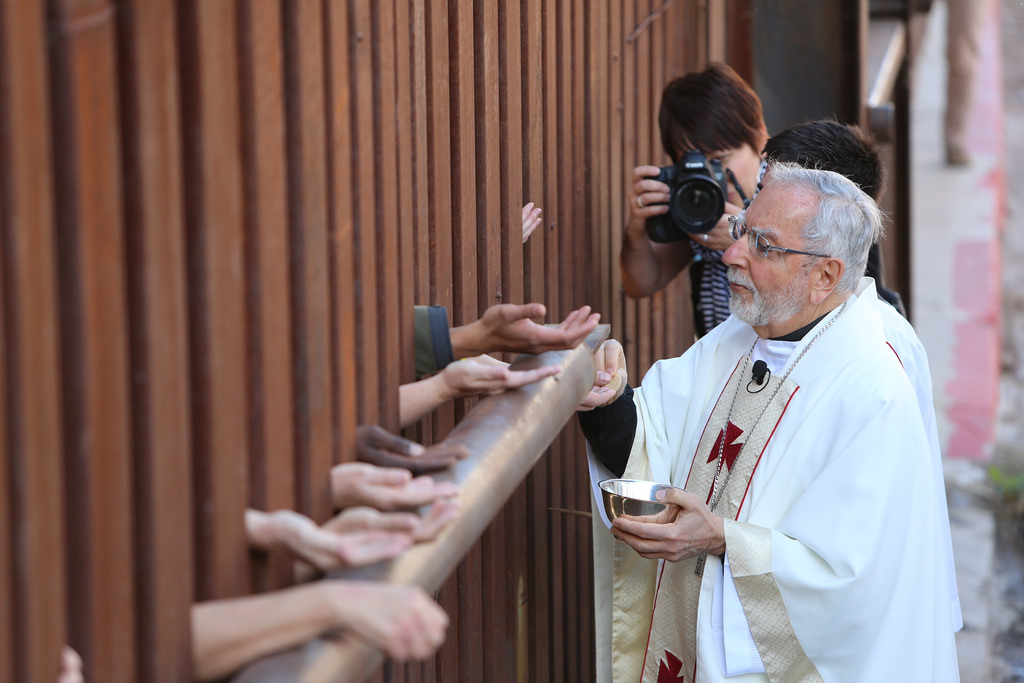 On Tuesday, the United States Conference of Catholic Bishops held a Mass on the U.S.-Mexico border. Separated immigrant families took mass together for the first time in years with a 20-foot wall between them, like Maria Miranda of Tucson and her son Jorge Lopez. They attended the mass, with Jorge standing on the Mexican side, with the border fence between them. Cardinal Seán O’Malley of Boston and bishops from across the West and Southwest gave Communion to people on both sides of the border, and they honored the thousands who have died attempting to cross:

During Tuesday’s Mass, O’Malley and the bishops laid a wreath at the border wall in Nogales and called for Catholics to remember those who have died.

“We know the border is lined with unmarked graves,” O’Malley said. “They call them illegal aliens. We are here to say they are not forgotten. They are our neighbors. Our brothers. Our sisters. … You cannot love God without loving your neighbor.”

The Arizona Recovered Human Remains Project estimates that over 2,500 people have died crossing the U.S.-Mexico border since 2000.

Some immigrant families are also turning to their faith for justice. Pope Francis received a visit from a 10-year-old California girl who begged him to ask President Obama, who met with the pope last week, to stop her father’s deportation. Later that week, her father was released from a Louisiana detention facility:

“I don’t have the words to describe of the actions that she was able to do,” Vargas-Lopez said, through an interpreter.

His immigration status is still up in the air. But, for now, at least he is out.

“I feel very proud because I had been fighting for him for a very long time,” said Jersey. “It’s been very hard since my dad hasn’t been home. My mom has had to be the provider for my family, she’s been the mother and father for two years.”

The chances that the House of Representatives will pass immigration reform remains uncertain ahead of the midterm elections, but many faith leaders are pushing the moral case for immigration reform. Most recently, two prominent evangelical leaders—Ralph Reed, founder and chairman of the Faith & Freedom Coalition, and Russel Moore, president of the Ethics and Religious Liberty Commission of the Southern Baptist Convention—emphasized the common interest between faith leaders and other groups in a Wall Street Journal editorial. In it, they write:

Christian leaders, the business community and law-enforcement officials have been calling for months for a conservative approach to immigration reform. “Congress must work together to pass effective immigration reform that adheres to conservative principles: the rule of law, security and safety, family unity, and human dignity,” urges Sheriff Mark Curran Jr. of Lake County, Ill. “We need to ask ourselves what our founding fathers would do, because we know what Jesus would do.”

Through working and interacting with immigrants in their communities and congregations, people of faith see the direct impact our broken immigration system has on immigrant populations. This personal connection helps to transcend politics and highlights the need to enact humane immigration policies that unites families and respects the dignity of all individuals.

Photo Courtesy of the Roman Catholic Archdiocese of Boston.