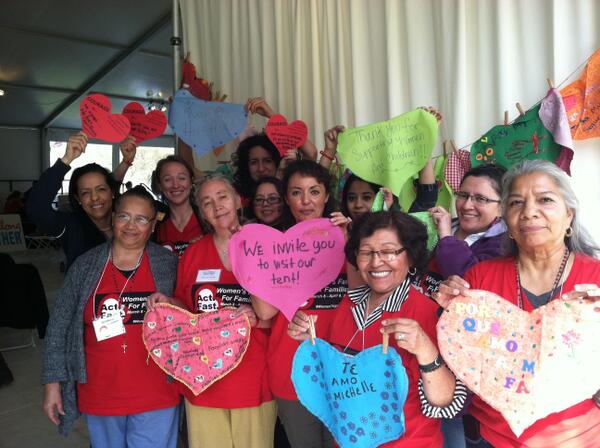 After traveling 18,000 miles and meeting with hundreds across the country, the Fast for Families bus tour ended in Washington, D.C., Wednesday with a rally in front of the U.S. Capitol. The fasters, faith leaders, and immigration advocates left Los Angeles seven weeks ago to take their message to 96 congressional members’ home districts. To wrap up their trek, they joined with more than 100 women who had been fasting for immigration reform and called on House leaders to bring immigration legislation up for a vote. “Today, we conclude our fast but it does not conclude our struggle,” Eliseo Medina—one of the core fasters who went without food for nearly a month last fall to press for reform—told the crowd. “We still have a long way to go but we’re going to get there.”

One of the fasters and bus tour participants, Dae Joon Yoong told the crowd gathered on the mall that the women fasters that their commitment to immigration reform that is fair to women and families reminded him of his mother. He said she was a proud immigrant who moved to the U.S. for a better life for her family even though it separated her from Yoong’s older brother. “We are building a movement. And this movement is about love. It is about family,” said Yoong.

Those women who fasted for 48 hours in a tent on the National Mall this week included Claudia, who told the crowd that her parents brought her to the U.S. in 1997 when she was 13 so that they could have a better life. “I didn’t know that I would be leaving my country forever,” she said. Claudia has temporary legal status through the Deferred Action for Childhood Arrivals (DACA) program, but she said it’s not enough because her parents can’t apply. The most painful thing for her is that she never got to say good-bye to her grandmothers, one of whom died before Claudia could see her again. “I fast for my own family and for all the children in this country who could lose their parents to deportation,” Claudia said. “The time is now.”

Throughout the Fast for Families bus tour, Medina said they heard stories of fear of deportation and hope for immigration reform from families across the country. And as they met with congressional representatives and their staff members, “Not one of them argued for the status quo,” Medina said. But they also said the time isn’t right for reform, just as Medina said people told leaders of the women’s rights and civil rights movements that the time wasn’t right. “We say to them the time is right and the time is now.”

Some members of Congress are afraid to act on immigration reform, Medina said, but that’s a needless fear because of the wide support. Medina reminded the crowd that the fight for immigration reform is a broad, diverse movement and that a vast majority of Americans back the issue. He led the crowd in chants of “Yes we can!” in English, Spanish, Korean, and Vietnamese. Following the speeches, the crowd marched to the Capitol with chants of “Si se puede!” and “Yes we can!” to leave messages for House Speaker John Boehner.

Some House members continue to push for a vote on immigration reform measures; most recently, House Democrats tried to add HR 15, the only bipartisan comprehensive immigration bill in the House, to the budget as an amendment. But as House leaders delay on allowing a vote, public pressure is mounting for a solution to the nation’s broken immigration system.

Photo Courtesy of We Belong Together.