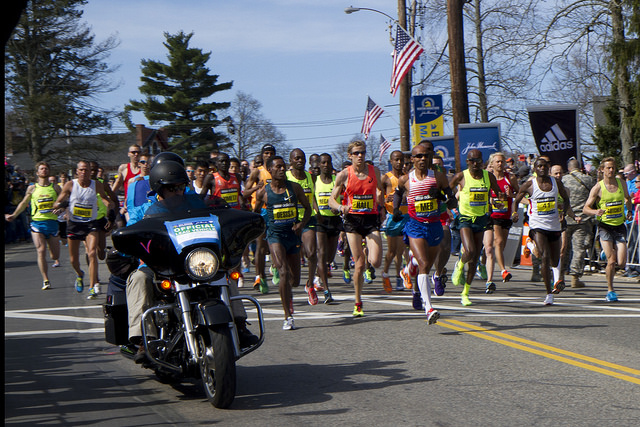 For the first time in more than 30 years, an American man won the Boston marathon yesterday. Meb Keflezighi, a naturalized American citizen who came to the United States at age 12, finished the 26-mile race with a time of 2:08:37, his personal best. The 38-year-old Keflezighi is a three-time Olympian who won the 2009 New York City Marathon, finished third in Boston in 2006, and won the silver medal for the U.S. in the 2004 Olympic marathon. Keflezighi is also an American by choice. He and his family came to the U.S. as refugees from Eritrea in 1987, and Keflezighi became a U.S. citizen in 1998, the same year he graduated from the University of California, Los Angeles.

Keflezighi’s story is undeniably American. After immigrating, his family settled in San Diego, California. He won both the 1600 meter and 3200 meter races at the 1994 California high school track and field championships. In college, he picked up numerous All-American honors and several NCAA championship titles. As he told Sports Illustrated in 2005, “I’ve done all my running here: junior high, high school, college, Olympics. How much more American can you get?”

Days before this year’s race, Boston marked the one-year anniversary of the bombings of last year’s marathon. Somber tributes on April 15—the day of the anniversary—remembered the four who died during the bombings. Keflezighi honored them as well; he had the victim’s names written on his race bib.

But after the bombings, “Boston Strong” became a rallying cry for the city, a sign of resilience and promise that the marathon would return. It is an undeniably American sporting event, with the marathon held every year on Massachusetts’ Patriots Day. Crowds of people turned out this year and encouraged Keflezighi the whole way:

As the frontrunner throughout the race, Keflezighi was cheered by massive crowds from Hopkinton to Boylston Street.

Keflezighi, wearing a red and white top and blue shorts, gave them a thumbs up or a fist pump in return. “I just used their energy,” he said. “I take so much pride in being an American.”

“As an athlete, you have dreams and today is where the dream and reality meet. I was just crying at the end,” he said, according to USA Today. “This is probably the most meaningful victory for an American, just because of what happened. It’s Patriots Day.”

We are a nation of immigrants, and it is the immigrants arriving in the U.S. for any number of reasons—be it to escape their war-torn homelands or searching for new economic opportunities—who continue to make the country better. Jeb Bush was correct when he said immigrants who come to the U.S. looking for a better life do so out of an “act of love” for their families. Keflezighi’s family seems to be no exception.