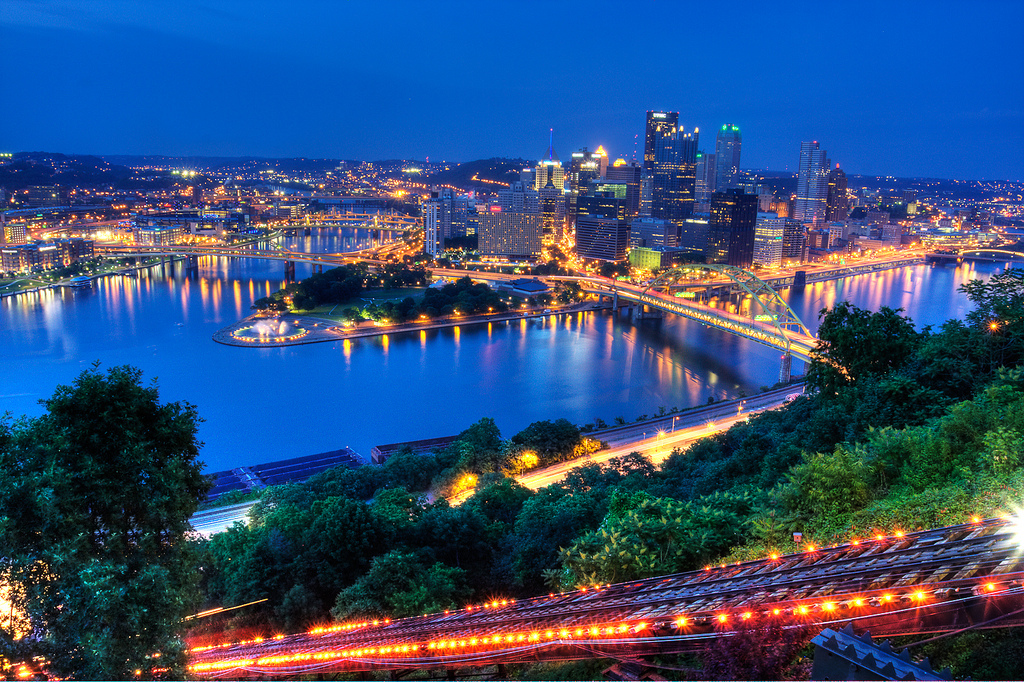 Gabriel Berumen, originally from Mexico, knows the value of immigrant-owned small businesses for local communities. He started Las Palmas, a Latino grocery store chain, in the Pittsburgh area. Now, Las Palmas has expanded to suburban communities around Pittsburgh. Berumen’s chain of grocery stores is an example of how Pittsburgh, once the heart of America’s steel industry, is exploring ways to advance its diversified post-industrial knowledge and service-oriented economy. Like a growing number of cities, Pittsburgh leaders are encouraging immigrants to settle in the city. “Pittsburgh has long been home to generations of immigrants—it drew my family here and so many others—but there is much more we can do, especially in supporting business opportunities and innovation among all our residents, old and new. While we celebrate our immigrant past, we need to build on a welcoming future,” Pittsburgh Mayor Bill Peduto said at the launch of Welcoming Pittsburgh in late May. As Immigrant Heritage Month continues, places like Pittsburgh are working to attract, welcome, and retain immigrants, and are networking together to share best practices and learn from one another. One such example is the second Global Great Lakes Network Convening, which brought together representatives of cities and organizations across the Midwest and Great Lakes regions working on immigrant-related economic development initiatives.

Speaking at the convening’s opening session last week, Peduto and Allegheny County Chief Executive Rich Fitzgerald noted that immigrants were an important component in industrial cities—places like Pittsburgh, Cleveland, Buffalo, and Detroit—and are important today in helping regions to grow. For example, Pittsburgh is beginning the process of not only seeking ways to grow its human capital, both incumbent and new, but also cultivating a broader welcoming environment toward newcomers through initiatives such as Vibrant Pittsburgh, Global Pittsburgh, and Welcoming Pittsburgh. Allegheny County and the City of Pittsburgh are both members of the nationwide Welcoming Cities and Counties initiative. And as Fitzgerald noted, they’re encouraging all of the county’s more than 100 municipalities to become welcoming cities. That could be an important step as over half of immigrants in the U.S. actually live in suburbs of the largest metropolitan areas. In the case of the Pittsburgh metro area, three-fourths of immigrants live in the surrounding suburbs. Peduto and Fitzgerald also noted that efforts are underway at the state level to create a more welcoming environment for immigrants to Pennsylvania. Last week, Pennsylvania Sen. Jim Ferlo introduced a bill to create an Office of New Americans, which would serve as a liaison between the state and immigrant communities.

Participants at the convening frequently returned to the importance of strengthening the existing workforce while also attracting new talent to cities. “In order to be a growing place, an economically growing place, you have to have people—talent—that’s contributing as workers, as entrepreneurs, as job-creators, as educators, as students—you need to have individuals making those contributions, anchoring themselves in your community, doing great things,” said Melanie Harrington, president and CEO of Vibrant Pittsburgh. “We need to be able to attract and retain and sufficiently engage and include and integrate immigrants into our community,” she said. “These will become the new Americans that will ensure the economic prosperity of our region.”

Sunil Wadhwani, an immigrant entrepreneur, co-founder and co-chairman of iGATE Corporation, told conference attendees that “immigrants add value, and regions around the nation are beginning to recognize this.” As this message begins to resonate around the country, the efforts of cities and counties to create more welcoming environments serve as a stark contrast to Congressional inaction, but also give hope for more and better reform to come.