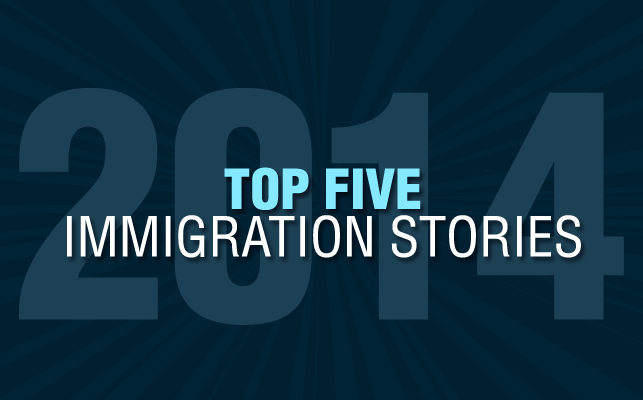 This year, the narrative on immigration swung from hope that the House of Representatives would follow the Senate’s lead and act on comprehensive immigration reform legislation to hopelessness when Republican leaders refused to act. Then attention turned to anticipation of the President’s announcement of temporary executive actions to improve the nation’s immigration system. Also, over the summer, thousands of Central American mothers and children fled violence, rape, and persecution in their home countries and arrived at the United States’ southern border. And, earlier in the year, pop-culture crossed wires with immigration as some questioned if Justin Bieber’s alleged criminal acts would make him deportable. This past year proves there is never a dull moment in the immigration news cycle, however from our perspective these are the top immigration stories of 2014:

1. The President’s Executive Action on Immigration

The series of changes, updates, and temporary measures Obama announced relies on the expansion of successfully implemented programs (i.e., Deferred Action for Childhood Arrivals), enhanced efforts to coordinate immigration enforcement and benefit policies across agencies, and attempts to use immigration as a tool of economic and social change. But they are temporary and reflect the limits of executive authority, serving as little more than a Band-Aid until Congress approves a long-term solution.

After the Senate approved S. 744, its immigration bill, in 2013, this year started with hope that the House would take action as well. In January 2014, Speaker Boehner released the House Republicans’ principles of immigration reform, but those guidelines did not lead to a renewed push for reform. House Democrats attempted to force Boehner to call a vote on H.R. 15 when they filed a discharge petition in March, but it did not receive enough votes.

Instead of offering a legislative solution to the broken immigration system, the House voted on piecemeal measures that failed to address the problems the immigration system faces. For example, before the August recess, House Republicans approved a bill that allocated only a fraction of the funds needed to address the humanitarian situation surrounding unaccompanied children and passed a bill to end DACA (the Senate never voted on these) because many Republicans claim the program incentivized Central American immigrants to cross the U.S. border.

The number on unaccompanied minors arriving has risen at a concerning rate in the past few years, but it peaked this summer when tens of thousands of immigrant children and women arrived at our southern border after making the harrowing journey from Central America and Mexico to the north. These children fled countries that are not only some of the most violent in the world, but countries where the rule of law is in tatters.

The White House asked Congress for additional funding for an aggressive border enforcement strategy while also setting up a temporary detention facility in Artesia, New Mexico. The facility holds the mothers and children who arrived and allows the government to fast-track their deportations despite the fact that many are seeking safety from the death threats, rape, and other abuses in their home countries. In August, the American Immigration Council and other immigration groups were among a coalition of groups that filed a lawsuit against the federal government to challenge its policies denying a fair process to mothers and children. And despite past and current experiences showing that family detention is inhumane and incompatible with a fair legal process, the Department of Homeland Security opened a permanent, 2,400-bed detention center in Dilley, Texas in December.

June 15 marked the two-year anniversary of President Obama’s announcement of the Deferred Action for Childhood Arrivals (DACA) Program, meaning also that many of the original beneficiaries began renewing their temporary two-year work authorization. DACA temporarily defers the deportation of eligible undocumented youth and young adults, and grants them access to renewable two-year work permits and Social Security numbers. While DACA does not offer a pathway to legalization, it has helped over half a million eligible young adults move into mainstream life, thereby improving their social and economic well-being. In his November executive actions, President Obama expanded DACA by eliminating the age ceiling and making individuals who began residing here before January 1, 2010 eligible. Moreover, the administration announced that DACA grants and accompanying employment authorization will, as of November 24, 2014, last three years instead of two.

This year also saw an increasing focus on the abuses of federal immigration agents at the border. The American Immigration Council put a spotlight on the lack of accountability and transparency which afflicts the U.S. Border Patrol and its parent agency, U.S. Customs and Border Protection (CBP) in a report titled No Action Taken: Lack of CBP Accountability in Responding to Complaints of Abuse. Based on data obtained through FOIA, the report shows than more often than not complaints of abuse filed with CBP result in no action taken against the Border Patrol agents accused of the abuse.In response, CBP leadership made public new measures designed to increase the agency’s openness and transparency. In December, Department of Homeland Security Secretary Jeh Johnson announced that CBP will now have criminal authority to investigate complaints within the organization. In addition, CBP is adopting a unified, formal review process for use of force incidents, which will allow the agency to “effectively respond to, investigate, coordinate, report, review and resolve use of force incidents in a timely manner.”