President Obama: Being ‘As Aggressive As We Can’ Defending Executive Actions 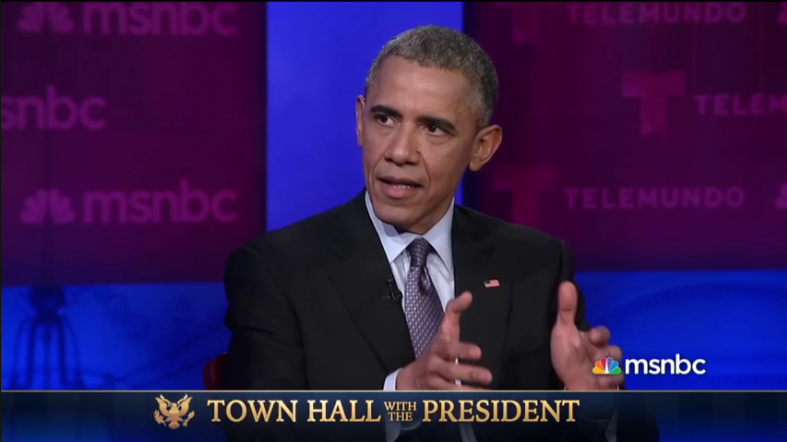 President Obama said during Wednesday’s town hall in Florida that his administration is being “as aggressive as we can” to defend his executive actions against a legal challenge brought by 26 states. After a federal judge in Texas temporarily halted the President’s deferred action initiatives, the expansion of Deferred Action for Childhood Arrivals (DACA) and Deferred Action for Parents of Americans and Lawful Permanent Residents (DAPA), the Justice Department filed an emergency stay asking the federal judge in Texas to lift the temporary hold.

The President said, “I’m using all of the legal power vested in me in order to solve this problem.” “We’ve got some disagreements with some members of Congress and some members of the judiciary about what should be done, but what I’m confident about is, ultimately, this is going to get done.” Later, he added, Congress must approve legislative reforms to improve the U.S. immigration system instead of relying on temporary fixes.

President Obama acknowledged that his initiatives do not help everyone, noting that his executive authority has limits, and that his actions could be undone by another administration. “In order to make sure that we don’t have any heart-breaking stories with respect to immigration, we’re going to have to fix the law,” he said. And he assured low-priority immigrants that they should not be afraid, according to the New York Times:

[I]mmigrants who would qualify for deportation reprieves and work permits under those actions — including people brought to the United States as young children, and the parents of American citizens — should be confident that they will not be deported. He said he had ordered immigration and border officials to focus on criminals and recent immigrants in carrying out any deportations.

“Even with legal uncertainty,” Mr. Obama said, “they should be in a good place.”

Despite the temporary hold on the deferred action initiatives, the enforcement changes included in President Obama’s November executive actions should continue to move forward.

In addition to the lawsuit, some Republicans in Congress are pushing for a bill to defund DAPA and the expanded requirements for DACA that President Obama announced in November. The President told MSNBC’s Jose Diaz-Balart that he would not be deterred. “In the short term, if Mr. McConnell, the leader of the Senate, and the speaker of the House, John Boehner, want to have a vote over whether what I’m doing is legal or not, they can have that vote,” President Obama said. “I will veto that vote because I’m absolutely confident it’s the right thing to do.” Many House Republicans have insisted on tying the funding for the Department of Homeland Security, which runs out of money Friday without a new appropriations measure, to gutting the President’s executive actions.