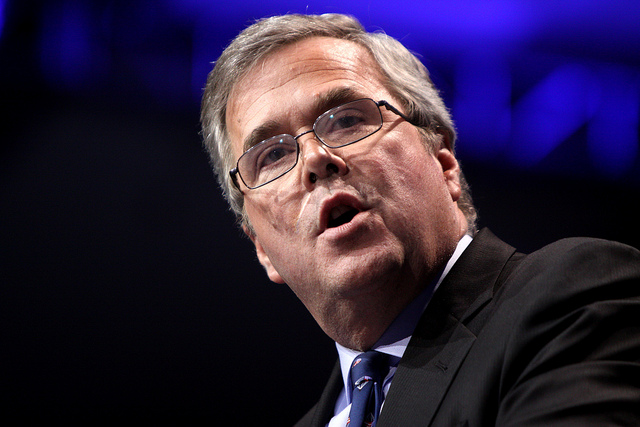 Most Americans want immigration reform. President Obama’s executive actions took temporary steps to provide relief for millions of undocumented immigrants who have spent years here, but it is up to Congress to pass legislation that would comprehensively improve the immigration system. According to a February poll from Public Religion Research Institute, nearly three-quarters of Americans polled said that “Republicans in Congress should prioritize passing comprehensive immigration reform legislation over legislation that would overturn Obama’s immigration policies.” But if you listened to what the potential Republican presidential candidates had to say about immigration at last week’s Conservative Political Action Conference (CPAC), that’s not the message they had.

From Louisiana Gov. Bobby Jindal’s criticism of President Obama’s executive actions to Sen. Marco Rubio’s push for ensuring border security, many speakers raised immigration at CPAC as an issue to be attacked with strong enforcement policies.  Some of these newly held positions are in contrast to past support for reform. For example, Rubio, a Republican from Florida, was part of a bipartisan group to craft the 2013 Senate immigration bill. He distanced himself from that bill at CPAC, saying, “What I’ve learned is you can’t even have a conversation about that until people believe and know, not just believe but it’s proven to them that future illegal immigration will be controlled.” As compared to his past support for comprehensive immigration reform legislation, Rubio insisted last week that an enforcement-first approach on immigration policy is “the only way forward.”

Wisconsin Gov. Scott Walker also flip-flopped on his immigration stances. Following his appearance at CPAC, Wisconsin Gov. Scott Walker said on Fox News Sunday that he no longer supported a path to citizenship for undocumented immigrants. “My view has changed. I’m flat out saying it,” he said. In 2013, he said a plan to provide a path to citizenship with requirements “made sense.” When he was asked about his current views on legal status, Walker added, “I believe there’s a way that you can do that. First and foremost, you’ve got to secure that border or none of these plans make any sense.”

Jeb Bush, who is running for the Republican presidential nomination, stood by his immigration positions during his CPAC speech:

Bush criticized President Obama’s recent executive actions and stuck by his idea that strong border security coupled with a path to citizenship for undocumented immigrants already in the USA as the right approach. “A great country needs to enforce the borders,” he said, adding that there should be a plan so that immigrants can petition to have their spouse and minor children living abroad to join them.

Bush acknowledged there is disagreement among Republicans about a path to legal status for undocumented workers already in the United States, but he held firm. “There is no plan to deport 11 million people,” Bush said.

Despite the chorus of support for stronger border security at CPAC, as Paul Waldman points out at the American Prospect, most of the 2016 Republican candidates or potential candidates have said something positive about allowing undocumented immigrants to apply for some kind of legal status. But Waldman writes that almost all of them now say that securing the border is the answer without answering what a secure border looks like.  “The Border Patrol’s budget has doubled over the last decade, even as the number of illegal crossings plunged after the Great Recession. But no matter what happens, Republicans can always say that we can’t have comprehensive reform yet, because the border is not secured,” Waldman writes.

It’s undeniable that immigration reform will help the U.S. But instead of offering solutions on how to achieve that goal, potential GOP presidential contenders fell back last week at CPAC on the same enforcement-first policies that throw more money at the border that the U.S. has had in effect for decades.