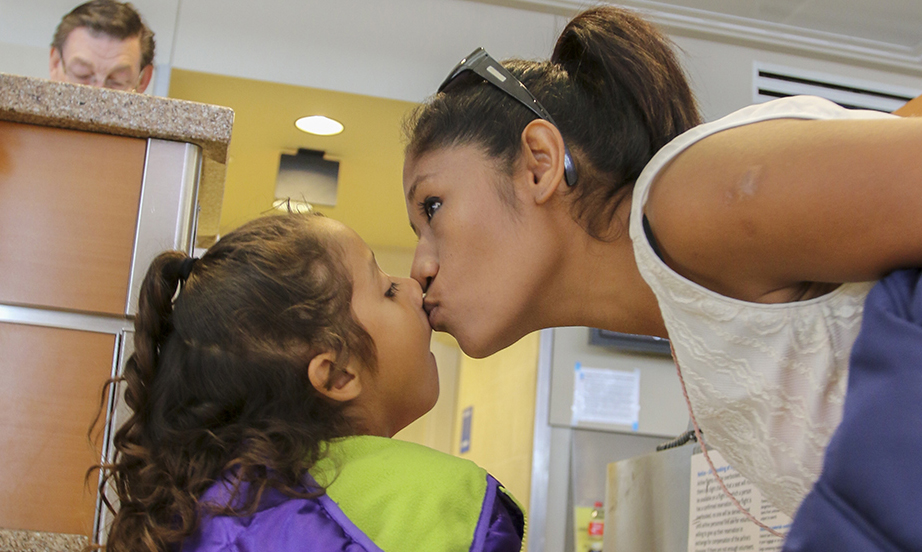 On Friday evening, just before the Labor Day weekend, the government released five mothers and their five children, ranging in age from three to seventeen years old, from the South Texas Residential Family Detention Facility in Dilley, Texas. These families, who sought refuge in the United States after fleeing violence in El Salvador and Honduras, each comprised of one mother and one child and had been held anywhere from seven to fourteen months. This lengthy detention is in marked contrast to the short-term processing facilities the government claimed to be operating in its most recent briefing in the Flores case, where the Judge concluded that in general, children should be released within three to five days of apprehension at the border.

One of the five families released on Friday endured almost all iterations of family detention in the past year. The mother and child were originally detained in Artesia, New Mexico, then transferred to Karnes City, Texas, and finally to Dilley. Their release came after almost fourteen months behind bars. Given that in May, June, and July 2015, Department of Homeland Security (DHS) Secretary Jeh Johnson announced reforms to the family detention program, the continued detention of these five families, among others, until September was confusing and unwarranted. The incomprehensibility of the government’s policy to detain families is further highlighted by District Judge Dolly Gee’s decision in August, which found that the current policies fail to meet clear standards under the original Flores settlement agreement, which set minimum standards for the detention, release and treatment of children subject to immigration detention, including, in general, release within three to five days of apprehension at the border.

The deplorable conditions in family detention facilities have been well-documented; the American Immigration Council and partners have filed complaints with the DHS Office of Civil Rights and Civil Liberties on the inadequate medical care and the detrimental psychological effects of detention on children and families. Indeed, the six-year-old girl released on Friday from family detention had to be transported offsite for medical care when she was vomiting blood, but was then returned to Dilley and held with her mother before finally being released, several months later, after a total of seven and a half months in detention.

These five families did not simply fall through the cracks. Their prolonged detention was with full knowledge of the U.S. government and despite sustained advocacy efforts, which included multiple parole requests and requests for custody re-determinations, habeas petitions, case elevation to ICE Headquarters, damages claims, and pressure from media  stories highlighting their plight.

CARA Pro Bono Family Detention Project staff described the moment when two of the five mothers released on Friday night first saw each other after they learned they would finally be released. The two women, mothers to daughters ages six and eight, embraced outside the legal trailer and then fell to the ground crying, reaching their arms up to the sky in thanks.

These children and their mothers are now reunited with family, throughout the U.S., including a husband, a father, and a grandmother, and are working with their attorneys to pursue their claims for protection under U.S. immigration law. Clearly these mothers would not have chosen to endure such lengthy detention with their children if they could safely return to their home countries. These cases underscore the reality that advocates must continue to hold the government accountable and push to end the untenable practice of detaining children and mothers seeking refuge in the United States.