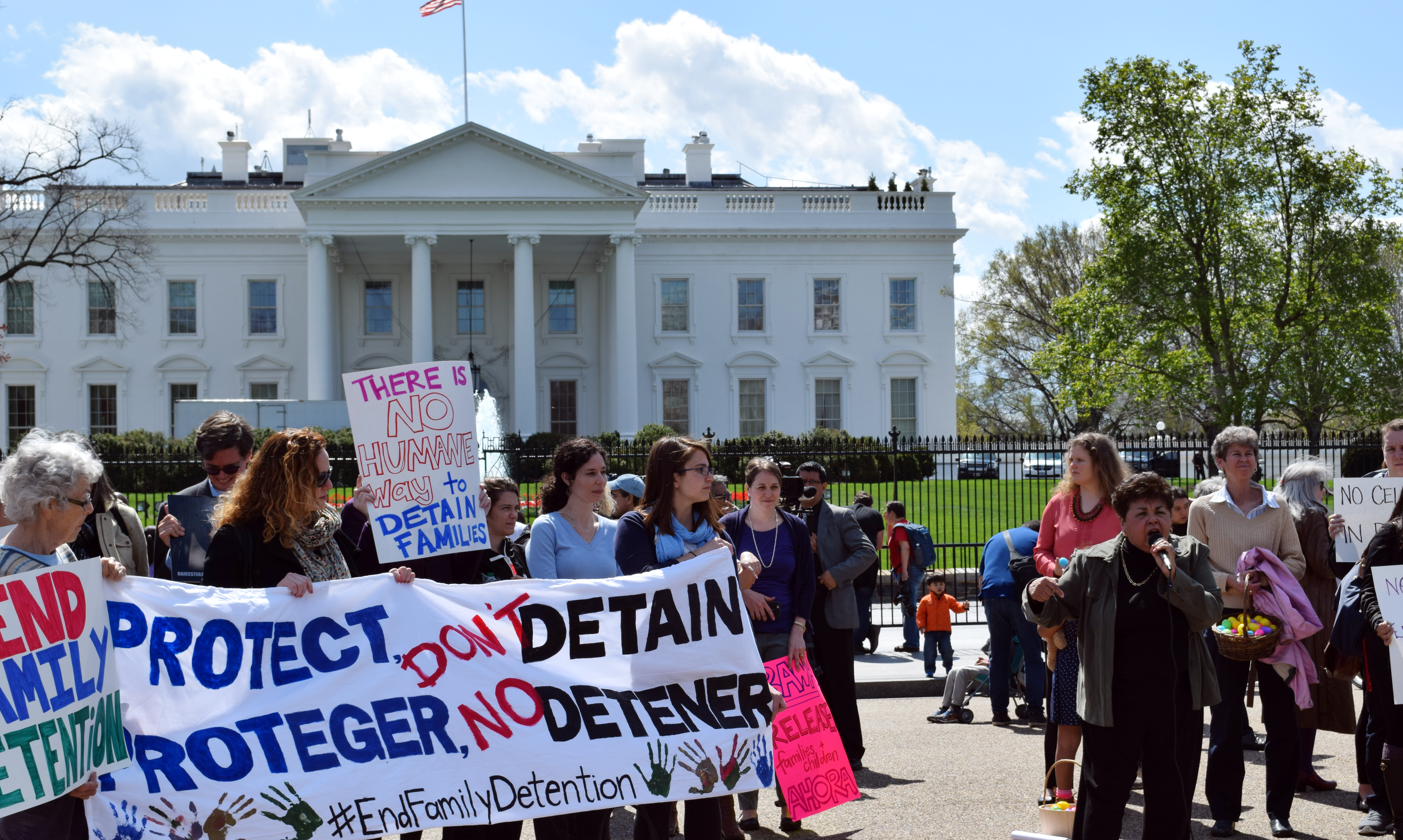 Protesters gathered in Lafayette Square just across from the White House on Monday. The protest coincided with the 138th annual White House Easter Egg roll. As families inside enjoyed the annual White House festivities, protesters outside the gates highlighted the plight of detained immigrant families. On a day filled with tradition and meaning for so many Central American families, there is no Easter celebration in detention for these families.

The U.S. Department of Homeland Security currently has the capacity to hold approximately 3400 children and mothers in detention centers in Texas and Pennsylvania. The Obama administration initiated the policy of detaining families in the summer of 2014 when the numbers of families fleeing violence in Central America spiked.

Speakers at the vigil included leaders from the CARA Project, CLINIC and RAICES, along with Montgomery County Maryland State Delegate, Ana Sol Gutierrez, who spoke passionately about the outrageous detention of refugees and urged President Obama to stop the practice of detaining families. Former CARA staff attorney Isabel Saavedra spoke out about her life-changing work at the Dilley detention center, along with a formerly-detained mother, who emphasized that the detained families are seeking protection and pose no threat to the community. Reverend Sharon Stanley-Rea led the protestors in a solidarity prayer and urged them to continue speaking out about the plight of detained families.

Of course this is not the first time that the religious community has spoken out against the detention of children and families. The U.S. Conference of Catholic Bishops has publicly called for an end to family detention.

The protest also marks the one year anniversary of the CARA Family Detention Pro Bono Project however there is no cause for celebration, but rather, a moment for pause, reflection, and a re-commitment to ending family detention. In the past year, the CARA Project has represented more than 7000 families and over 700 volunteers have given up their lives and traveled to Texas for a week or more at a time to work grueling hours to assist these families. The result is that 91 percent of families who CARA prepares for a credible or reasonable fear interview, the first step in seeking asylum and protection here in the United States, receive positive decisions, are released and reunited with loved ones in the United States. Sadly, the need for volunteers and legal representation for these families continues, while detained, and also after release. Families struggle to find affordable or pro-bono legal representation and to understand the complicated laws and legal process surrounding asylum and other protections here in the United States.

The government continues to cling to its senseless policy of detaining children and families. They are appealing the latest orders in the Flores case, limiting the detention of children, to the Ninth Circuit Court of Appeals, while they also fail to comply with the terms of those orders and the original Flores settlement. In the spirit of new beginnings and Easter, it is high time the government turned a new leaf and ended the detention of children and families once and for all.