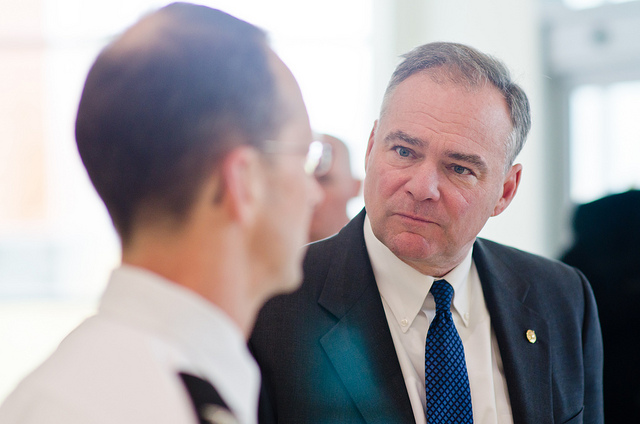 A look into Tim Kaine’s past positions on immigration reveal that he has supported steps towards reforming America’s immigration system, has spoken out against punitive, anti-immigrant measures at the state level, and has made significant efforts to reach out to the immigrant community.

In 2010, while serving as Chairman of the Democratic National Committee he admonished Arizona’s notorious, anti-immigrant measure SB 1070, calling it “small-minded and short-sighted.”

Tim Kaine also supported the DREAM Act and as a Senator voted yes on S. 744, the last immigration reform bill to pass the senate.  He also famously gave a floor speech on the need for immigration reform in fluent Spanish while the debate over the legislation waged.

In 2015, he made public statements in support of the Deferred Action for Childhood Arrivals (DACA) initiative noting that the “DACA program announced by the President has allowed young people to contribute to our communities, live without constant fear of deportation, keep families together and provide economic and educational opportunities for these young recipients.”

Earlier this year, he participated in the DAPA dinners campaign where he shared a meal with a family who would be eligible for these deferred action initiatives in an effort to bring attention to the needs and struggles of mixed-status families.

His Senate website describes his current vision for reforming immigration:

For far too long, our immigration system has placed undue burdens on legal immigrants and kept millions of others living in the shadows of our society. I support a bipartisan approach to immigration reform that will provide a better visa system to encourage growth of a talented workforce, enhance our border security, create a path to normalizing the legal status of those here unlawfully – following compliance with various requirements such as payment of taxes and a fine – and establish a better system for companies to verify the immigration status of their employees.

According to the New York Times “Mrs. Clinton and Mr. Kaine have similar positions on the issues and they are said to share an easy rapport and a love of granular policy-making.”  It also seems Ms. Clinton has found a running mate whose current thinking on immigration policy aligns with hers.