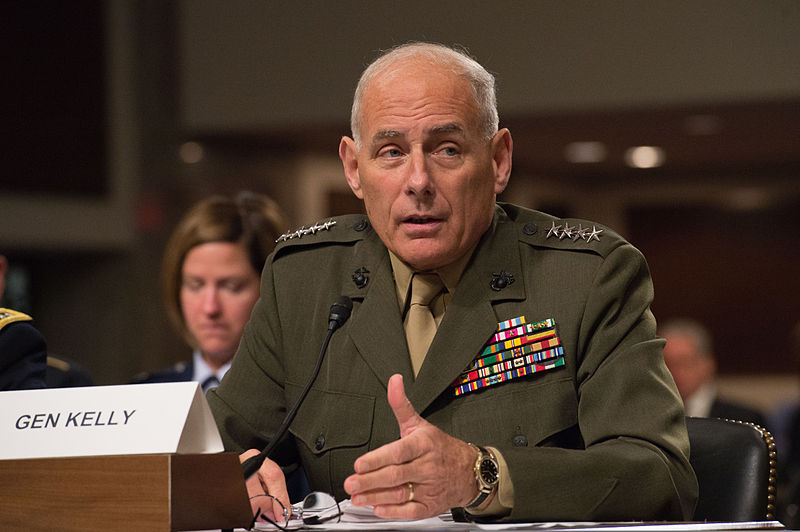 Earlier this month, President-elect Donald Trump selected retired General John Kelly to be his nominee for Secretary of the Department of Homeland Security (DHS). There is not much in the record to indicate Kelly’s views on immigrants and immigration. In February of this year, Kelly retired as commander of the U.S. Southern Command, which is responsible for U.S. military operations in the Caribbean and Central and South America.

As such, he is on the record regarding perceived threats to the U.S. from south of the border and how they should be handled.

In testimony to the Senate in March of 2015, he told members of the Armed Services Committee that terrorists could exploit existing criminal networks trafficking in drugs and persons—perhaps even bringing weapons of mass destruction into the U.S. along existing smuggling routes. He acknowledged that the government had not yet seen evidence that criminal smuggling networks were interested in supporting terrorist groups, but he said he was “deeply concerned that smuggling networks are a vulnerability that terrorists could seek to exploit.”

While these views appear to be aligned with President-elect Trump’s promise to focus on securing the border, and Kelly does support enhanced border security, he believes that a wall is not going to stop people from coming here. In his Senate testimony, he said that, “addressing the root causes of insecurity and instability is not just in the region’s interests, but ours as well.”

His more holistic approach to the region’s problems may clash with immigration hardliners that Trump has surrounded himself with. These hardliners include Senator Jeff Sessions, nominated to be Attorney General, and Kris Kobach, who has been advising Trump on immigration policy. For them, it is sufficient to enforce immigration laws and to build barriers to keep people out.

By his own account, Kelly has built good relations with human rights organizations. In a keynote address at a summit organized by Human Rights First in 2014, General Kelly said that he had “always made the cause of human rights a top priority for one very simple reason: because it’s the right thing to do.”

On the other hand, Kelly clashed with the Obama administration’s plan to close the military detention facility at Guantanamo, and dismissed criticism of the treatment of detainees as “foolishness.” He will be the third general nominated so far to fill a top administration post, raising concerns about an over-reliance on military figures to lead top national security posts in this administration. Border communities are concerned that choosing a general to lead the department in charge of border security will lead to further militarization of the U.S.-Mexico border.

How will his views about human rights and the root causes of migration from Central America translate to DHS policy towards the women and children who Kelly knows are fleeing violence and instability? How will his views shape the treatment of millions of undocumented immigrants who are today so much a part of our communities?

In part, that will depend on how Kelly fits in among administration figures whose views towards immigrants are marked by an absence of compassion. Kelly has no experience running a large civilian agency, and DHS is an enormous agency with plenty of internal conflict. Kelly will have plenty of battles to fight. A battle over immigration policy may not be one he chooses to engage.