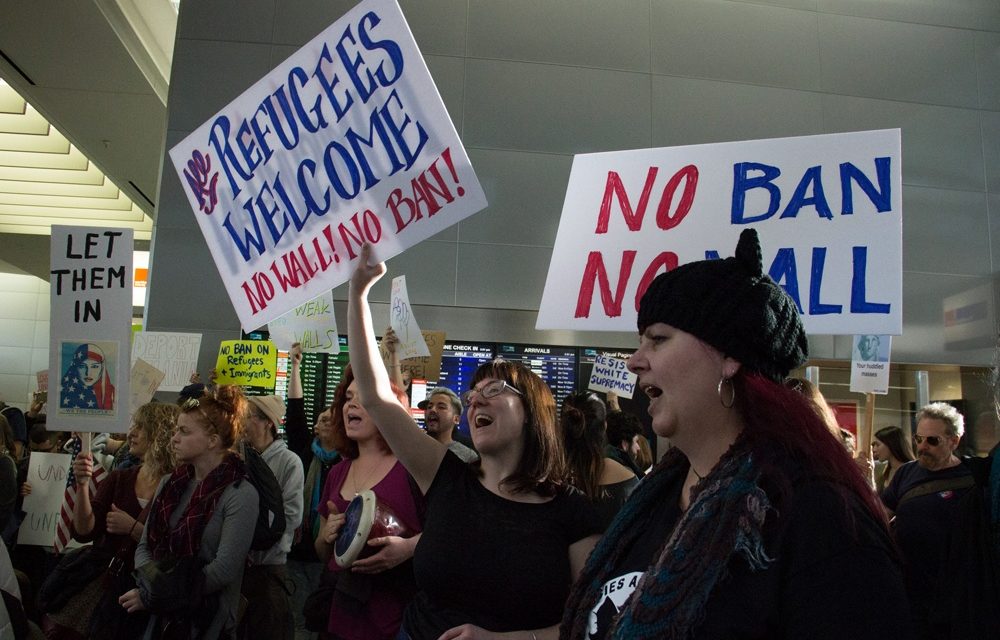 In his first week as president, President Donald Trump unleashed a series of executive orders, thereby launching his first strikes against current and future immigrants and refugees. In response, thousands of Americans mobilized over the weekend, demonstrating against the President’s actions. Strong opposition continues to come from foreign leaders, Congressional leaders, government bureaucrats, business leaders, university presidents, and others.

The far-reaching and highly problematic executive orders on “Border Security and Immigration Enforcement Improvement” and “Enhancing Public Safety in the Interior of the United States” seek to radically change immigration enforcement along the U.S.-Mexico border and throughout the entire country. Friday’s “Protecting the National from Terrorist Attacks by Foreign Nationals” is intended to halt all refugee admissions for at least four months and bans nationals from seven Muslim-majority countries from entering the U.S. for at least 90 days. Additional executive orders are expected in the coming days and weeks.

Given the immediate impact of the ban, Friday’s executive order resulted in a great deal of confusion, frustration, and anger across the country and around the world. When the executive order was made public, large protests erupted at the White House and at airports around the country, including large numbers of attorneys offering free legal assistance and Members of Congress leveraging pressure on immigration officials.

On Friday night and Saturday, the first travelers from the seven banned countries arrived at U.S. airports and were detained by Customs and Border Patrol (CBP) agents. CBP had not been issued clear guidance as to how the executive order was to be implemented, and as a result, treatment of foreign nationals differed by airport.

Among those detained and scheduled to be returned to their home countries were returning green card holders who already live and work in the U.S., as well as first-time green card holders whose vetting was recently completed, and temporary visitors to the U.S. One detainee was Hameed Khalid Darweesh, who had worked with the U.S. military as an interpreter in Iraq. As confusion and frustration rose and family members worried about their detained loved ones, immigration lawyers went to the airports to represent those in detention.

The ACLU, National Immigrant Law Center, and other legal organizations immediately challenged the executive order on behalf of Darweesh and others, and Saturday night a federal judge in the Eastern District of New York issued a nationwide stay of removal, preventing the Trump administration from deporting refugees and others who had lawful authority to enter the U.S. Similar lawsuits were filed in other cities: in Boston, the federal court prohibited the detention and removal of all those subject to the executive order but the order was limited to Logan Airport; in Virginia, the federal court ordered the government to give attorneys access to all green card holders being detained and prohibit their removal, and; in Seattle, the court prevented the removal of plaintiffs subject to the seven-Muslim-majority country ban. However, there were reports in multiple cities that CBP was slow to comply with the nationwide and local court orders, even after the federal judge’s order was issued.

Not until Sunday did the White House clarify that the order did not extend to returning green card holders. Despite other rumors about changes to the application of the policy, no further official guidance has been publicly released.

Democratic and Republican Members of Congress have also denounced the Muslim ban. Senate Minority Leader Chuck Schumer called the executive order “mean-spirited and un-American,” and said he would “claw, scrap, and fight with every fiber of my being until these orders are overturned.” Republican Senators McCain and Graham issued a joint statement saying “We fear this executive order will become a self-inflicted wound in the fight against terrorism.” Some also criticized the administration for failing to follow the regular protocols and consulting with the right people before issuing an executive order.  “You have an extreme vetting proposal that didn’t get the vetting it should have had,” said Ohio Sen. Rob Portman.

Opposition has appeared from within the government bureaucracy as well. Foreign Service officers from the department of State drafted a dissent memo in opposition to the refugee ban, claiming the policy “runs counter to core American values of nondiscrimination, fair play, and extending a warm welcome to foreign visitors and immigrants. Alternative solutions are available to address the risk of terror attacks which are both more effective and in line with Department of State and American values.”

Business leaders also condemned the Administration’s actions, explaining that the executive orders could make it more difficult for America’s companies to compete. Google ordered its employees traveling overseas to return to the U.S. immediately. Google says at least 187 foreign-born employees could be prevented from entering the country. Twitter’s chief executive tweeted that the economic impact of the Muslim ban is “real and upsetting.” Netflix chief executive said that “Trump’s actions are hurting Netflix employees around the world, and are so un-American it pains us all…Worse, these actions will make America less safe (through hatred and loss of allies) rather than more safe.”

Thus far, the opposition to Trump’s immigration agenda has been fast and furious and will likely continue as he continues to roll out additional immigration orders.