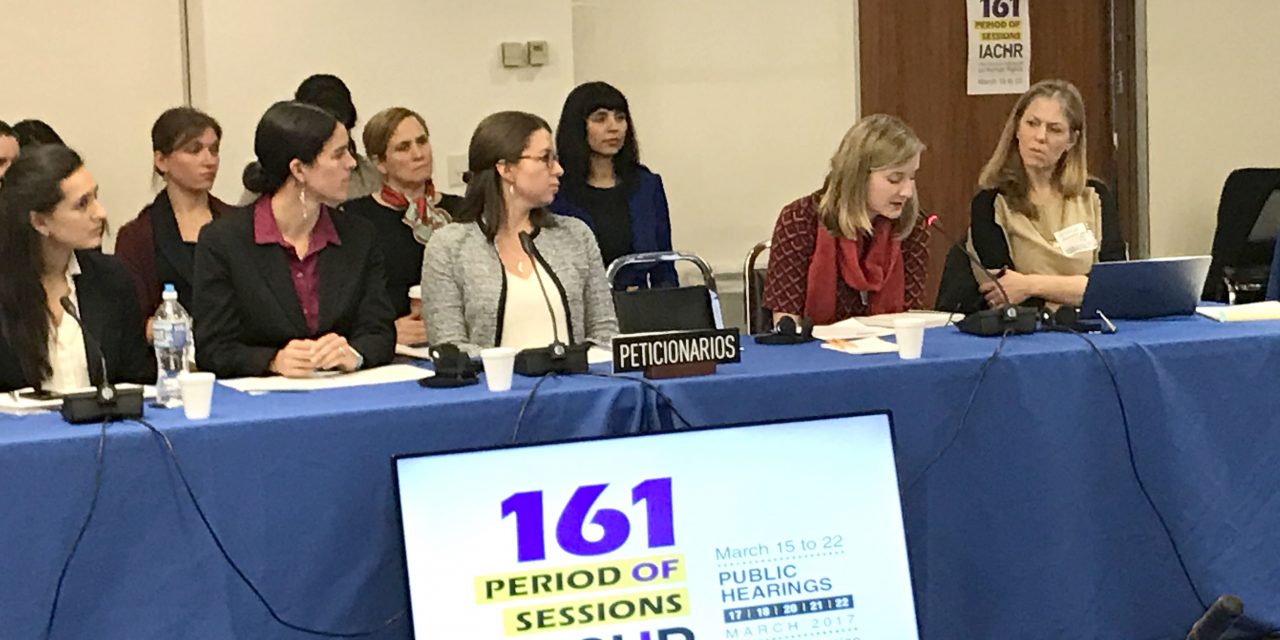 The Inter-American Commission on Human Rights (IACHR) heard testimony today about policies that prevent access to the U.S. asylum process for those fleeing grave danger in their home countries.

U.S. law guarantees the right to seek asylum to all who flee persecution and arrive at our border looking for protection. And yet, the testimony heard in Washington, D.C. today demonstrated that U.S. officials regularly deny individuals this right. Notably, no one from the U.S. government attended to refute the claims.

The hearing opened with testimony highlighting the barriers put in place during asylum seekers’ initial encounters with Customs and Border Protection (CBP) officers at ports of entry. The practice of turning away asylum seekers has become all too common and was recently brought to the attention of the U.S. government in a complaint. Despite the evidence presented and media coverage, this practice seems to be on the rise. According to one asylum seeker recently turned away by CBP, whose declaration was read at the hearing:

“I told [the CBP official] that I wasn’t from here, that I was from Honduras, and that I wanted asylum. He told me that there was no longer asylum for Hondurans. . . .  I pled with him for help and told him that I couldn’t return to Honduras. I started to explain why I couldn’t return and what I was fleeing from but he interrupted me and said that everyone comes with the same story, that he couldn’t help me . . .”

In addition, Nicole Ramos of Al Otro Lado described her experiences witnessing CBP officers attempting to turn away and deny access to the asylum process to sixty-eight asylum seekers she escorted to the San Ysidro port of entry in Tijuana, Mexico, over a fifteen-month period.  Daniella Burgi-Palomino of the Latin American Working Group testified about the extreme violence and impunity in Mexico’s northern border region, which awaits asylum seekers turned away at ports of entry, subjecting them to further danger.

The hearing also covered the horrible conditions and deplorable treatment of asylum seekers in CBP detention facilities, and the negative effects of detaining asylum seekers while their claims are pending. Joanna Williams of the Kino Border Initiative described her organization’s work with detained asylum seekers in Arizona and noted that CBP officials “willfully ignore and discourage” asylum applications. Theodora Simon of the Hope Border Institute explained that the systematic, prolonged detention of asylum seekers ultimately leads some to withdraw their applications.

At the end of the hearing, Commissioner Margarette May Macaulay stated that the Commission “cannot accept” these violations and emphasized asylum seekers’ “necessary, fundamental right to due process,” and the importance of a “dignified hearing” and a “fair and judicious decision.” She also asked petitioners to provide the Commission with written guidance about what the IACHR can do immediately that would effectively address these barriers to the U.S. asylum process.

Today, the international community stopped and listened to what is happening at the southern border of the United States. It is time policymakers in the U.S. did the same.