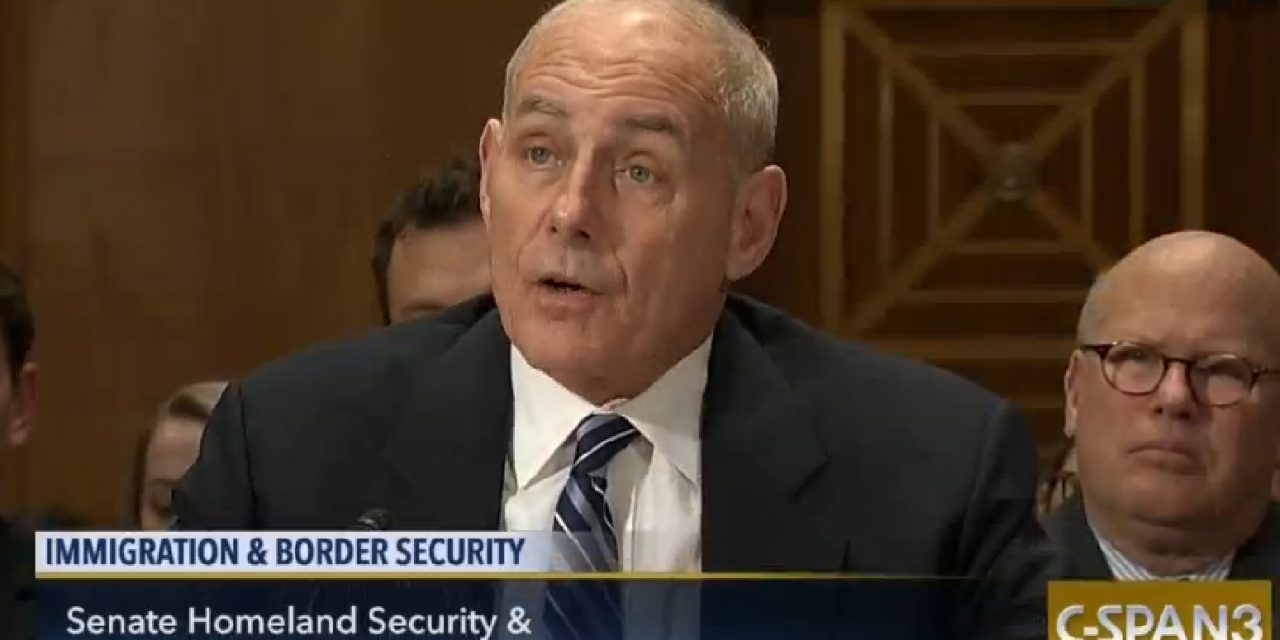 The Department of Homeland Security Secretary John Kelly testified before the Senate Homeland Security and Government Affairs Committee this week. During the hearing Secretary Kelly attempted to clarify some of DHS’s controversial positions as they relate to immigration enforcement, extreme vetting, family separation, and the building of a border wall.

Secretary Kelly noted early on that more fencing was going to be needed but also seemed to agree with Democratic and Republican senators who questioned whether a 2,000 mile wall was needed by saying, “it’s unlikely that we’ll build a wall or a physical barrier from sea to shining sea.”

Unfortunately, when pressed for details about what fencing would be built and at the cost, Kelly did not have specifics. He testified that DHS was conducting a study to examine needs and costs but stated that “There’s no way I can give the committee an estimate of how much this will cost.” This seemed to frustrate some senators who questioned how the Trump administration can ask for over $4 billion this year and next year for a border wall when there is no plan or cost estimate yet.

Senators were deeply critical of funding a border wall without a detailed plan. They noted there would be significant issues related to eminent domain, whereby the government seizes your property for public use, because much of the land along the border with Texas is privately owned. This prompted Senator Tester (D-MT) to say in the hearing that, “If someone tried to eminent domain my farm they would have to take me out in a box.”

Later in the hearing, Kelly walked back an earlier statement by DHS which implied that the agency was still deciding if it would enact a policy that separates mothers from their children when they are apprehended on the Southern border. Kelly, who was questioned heavily on this issue by Senators Harris (D-CA) and Heitkamp (D-ND), said it would only happen in limited circumstances, citing the possibility of a mother being sick but noted he “cannot imagine doing it otherwise.”  Kelly went on to say there is no written policy on family separation and there would not need to be one. Last month the American Academy of Pediatrics called the idea of separating families in this way “harsh and counterproductive.”

Also discussed at the hearing was an issue reported earlier in the week in the Washington Post that DHS was willing to arrest crime victims and witnesses at courthouses. This drew sharp criticism from advocates for sexual and domestic violence victims who fear the chilling effect this will have on victims seeking protection in or justice from the courts. In the hearing, Kelly refused multiple times to say that DHS would exempt domestic violence victims or witnesses from immigration enforcement.

Kelly also touted new statistics that show that Southern border crossings in March 2017 were at a 17-year low. He attributed this to a variety of factors, some of them being seasonal, but also pushed the agencies aggressive enforcement actions and rhetoric as a deterrent to those wanting to cross. He did caution that these low numbers would not continue without more enforcement actions like the building of more border fencing. He failed to mention that border crossings have been on the decline for years.

Lastly, Kelly was questioned on the issue of the multiple travel ban executive orders, including the chaotic roll out of the first one. It led Senator McCain to quip to Secretary Kelly, “Next time you do a travel ban, how about thinking it through?”

The hearing covered a wide variety of issues and grew contentious at times, with senators becoming frustrated with the lack of clear answers from Secretary Kelly. Throughout the hearing, Kelly promised to be more responsive to Capitol Hill as his leadership is confirmed by the Senate. Senators, however, seemed unwillingly to give him the benefit of the doubt as the administration continues its harsh enforcement policies.