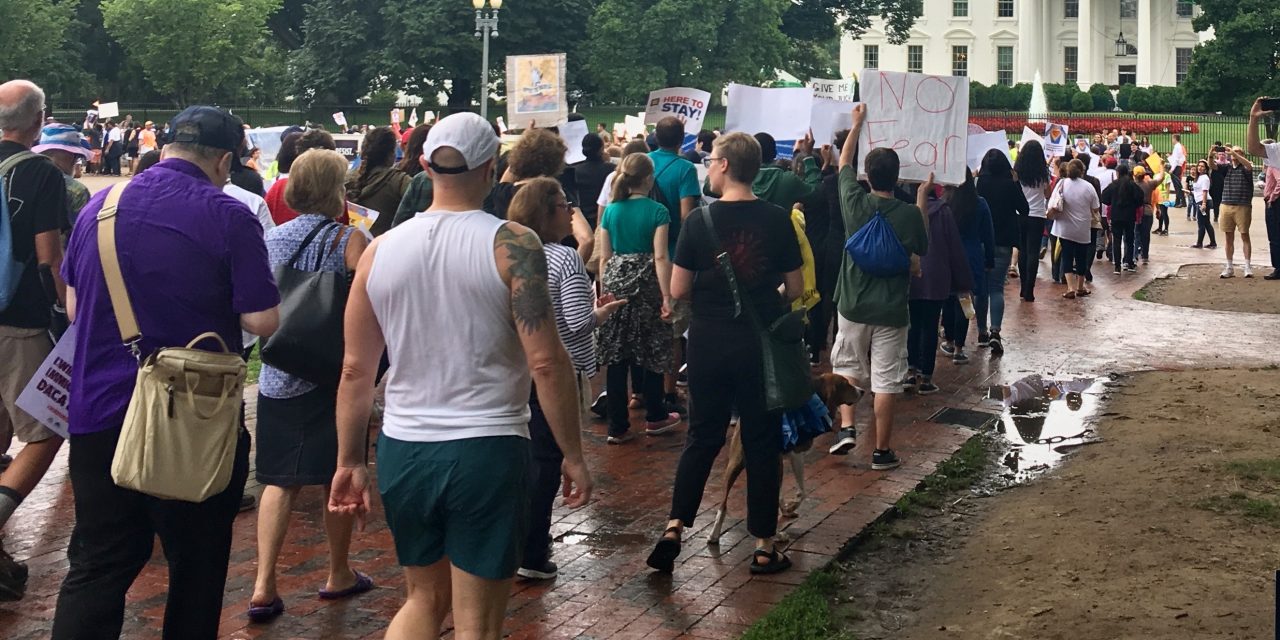 Hundreds gathered in front of the White House on a rainy Tuesday, not only to commemorate the fifth anniversary of the Deferred Action for Childhood Arrivals (DACA) initiative, but to fight for it. With 10 state attorneys general pushing for its termination and its future uncertain, nearly 800,000 DACA recipients fear the worst.

The fight for DACA reflects the vibrant community it protects—the group converging on the muddied White House lawn was overwhelmingly young and energized.

Since 2012, DACA has granted these young people a sense of security by offering them temporary relief from deportation. After passing strenuous background checks and paying fees, DACA permits them to work, go to school, and get a driver’s license. Revoking DACA would not only take that away, but would open up nearly 800,000 people to the grim possibility of deportation.

“[The administration] has us stressed,” said Diana, a DACA recipient in attendance at the rally. “Before, we felt safe, but now we’re living under constant stress.”

If the DACA initiative is terminated by the current administration, it would be the first time in American history that the president deliberately increased the size of the undocumented population. By revoking close to a million people’s paperwork, opponents of DACA would recklessly increase America’s undocumented population, tear families apart, and socially and economically cripple a group of young people who only wish to contribute to the country they call home.

Yet, this seems to be the end goal for DACA opponents. While the administration has so far kept the program in place, DACA faces an impending deadline of September 5, set by Texas Attorney General Ken Paxton and nine other states. The group of state attorneys general has threatened to take the administration to court unless it agrees to end the program by the deadline.

Recipients and advocates of DACA are preparing for the looming deadline. Sookyung Oh, D.C. Area Director of the National Korean American Service & Education Consortium, has planned a 24-hour vigil in front of the White House that will continue every day until the DACA deadline passes.

“We know that the president is the decision maker in this,” Oh said, “so what better thing to do than stand in front of his house and demand that he supports DACA?”

Until then, the activists reassured, the fight for DACA will continue one day at a time.

“Some people would say that we should be sad because DACA is under threat—and it is scary. It’s real,” said Greisa Martinez, Director of Advocacy and Policy at United We Dream. “But the reality is, is that the joy and resistance of our people lives on. The papers do not define us. The power in the love for our community defines us.”