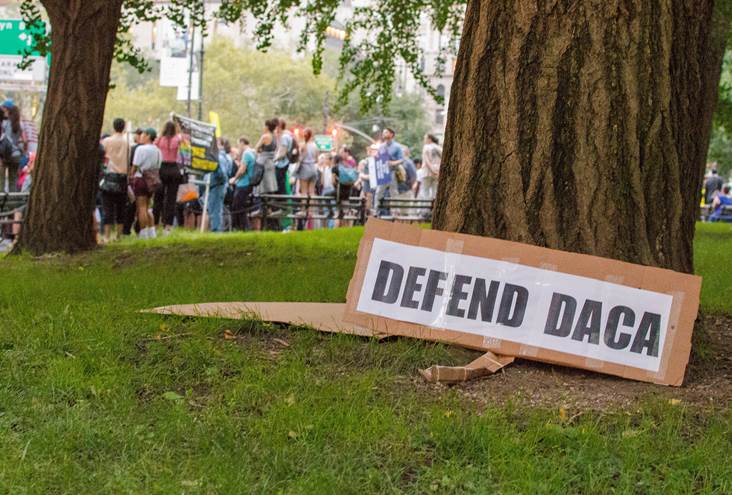 With the Trump administration announcing it was ending the Deferred Action for Childhood Arrivals (DACA) initiative on Tuesday, a number of states, non-governmental organizations (NGOs), and DACA recipients immediately went to federal court in attempt to stop its termination.

In the two days since the administration called an end to DACA, three lawsuits have been filed thus far. One lawsuit was filed by 15 states and the District of Columbia (D.C.), another by the state of California individually, and a third by a DACA recipient and Make the Road New York (MRNY).

The suit brought by 15 states and D.C., which was filed in the Eastern District of New York on Wednesday, asks the court to declare the administration and Department of Homeland Security’s DACA announcement unconstitutional. The states argue that it is unconstitutional on a variety of grounds, as well as in violation of the Administrative Procedures Act (APA).

On the same day, the state of California announced it was filing a separate suit challenging the ending of DACA. Attorney General Xavier Becerra said that even though their legal arguments will “mirror” those of the other states, California would file its own lawsuit because a quarter of all DACA recipients live in the state, making California susceptible to the most harm.

A final suit was brought to federal court by 26-year-old DACA recipient Martin Batalla Vidal and MRNY, who asked the court to amend an earlier complaint and allow them to challenge the administration’s decision to end DACA. Batalla Vidal and MRNY are represented by the National Immigration Law Center and the Worker and Immigrant Rights Advocacy Clinic at Yale Law School. Their original lawsuit stemmed from the expanded DACA and Deferred Action for Parents of Americans and Lawful Permanent Residents. Those proceedings were largely stalled with the changing administration, however.

“DACA has changed my life. It’s allowed me to pursue my dream of continuing my education and supporting my family, with the peace of mind that I won’t be separated from the people I love the most. Losing DACA would have a dramatic impact on my life. It would prevent me from being able to take on major professional or academic goals, make me unable to work legally, and put me at risk of being deported and separated from my family. This decision by Donald Trump is a direct attack on immigrant youth like me and on our families, and it’s based on one thing: the racist beliefs of a president who has been attacking Latinos and Mexicans since the first day of his campaign.”

The swift and strong reaction from states, NGOs, and individuals alike highlights a truth recognized around the country—DACA recipients greatly benefit the United States, and to lose them would squander both their potential and ours as a nation.