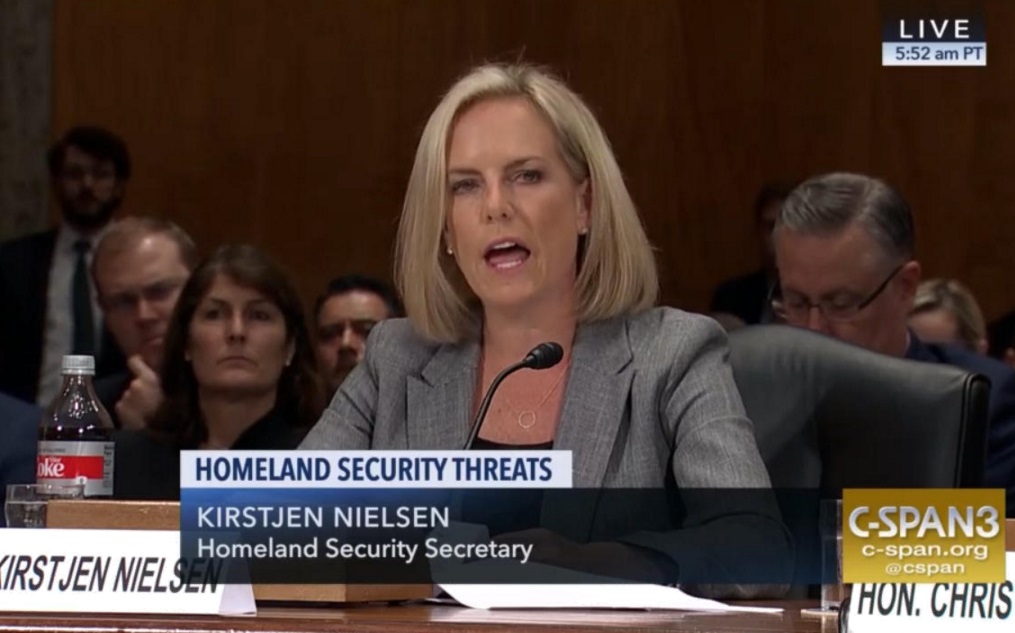 Senators grilled Department of Homeland Security (DHS) Secretary Kirstjen Nielsen about the Trump administration’s harsh immigration policies, including its practice of detaining migrant children and families, at a hearing on Wednesday. The most jarring moment of the hearing was when Secretary Nielsen repeatedly refused to admit that her agency detains children.

During the “Threats to the Homeland” hearing, held before the Homeland Security and Government Affairs Committee, many of the questions from Democrat and Republican senators touched on immigration. Strikingly, Secretary Nielsen’s opening statement did not even mention the word “immigration.”

While being questioned by Senator Peters (D-MI) on how children should be held in DHS custody, Secretary Nielsen claimed that the agency does not detain children and that they are instead sent to Health and Human Services.

This prompted Senator Harris (D-CA) to point to a DHS Office of Inspector General report released just last week, which detailed how Customs and Border Protection (CBP) detained hundreds of separated children for longer than they are legally allowed. One child was held for 25 days, the government report found.

“How do you reconcile the OIG report with your testimony?” Senator Harris asked.

Contrary to Nielsen’s statements, Immigration and Customs Enforcement (ICE)—a component of DHS—has over 3,000 detention beds at family detention facilities around the country, such as in Berks, Pennsylvania; Dilley, Texas; and Karnes, Texas. Each of these facilities detains children on a daily basis. CBP has apprehended and detained over 45,000 unaccompanied children who crossed the border in 2018 and separated thousands of children from their parents, holding them for days and sometime weeks in their detention facilities. CBP’s own policies surrounding children literally calls them “detainees.”

However, instead of admitting she had misspoken or seeking to clarify her remarks, Nielsen doubled down by saying these places are “not detention facilities” and they “process” children.

She also went on to vilify parents, saying “we do not have detention facilities at DHS for 10,000 children who were sent here unaccompanied—and their parents chose to do that.”

This hearing was just the latest in a string of comments in which Trump administration officials seem unable to admit to basic facts and take responsibility for their own policies and actions. That is why it is important for oversight entities like the inspector general and Congress to continue to conduct investigations and call for transparency and accountability of this administration.