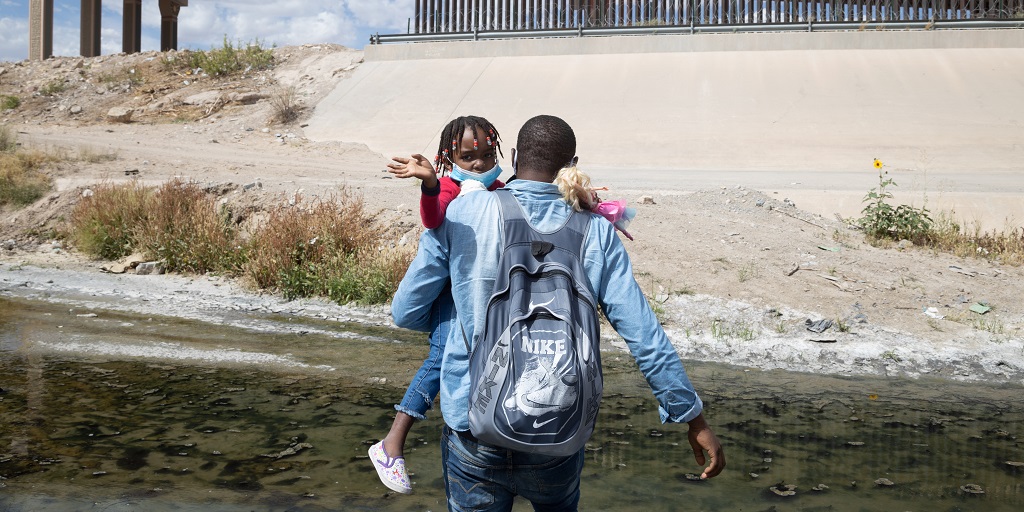 Roughly 14,000 Haitians arrived at the border across from Del Rio, Texas in mid-September and walked across the Rio Grande to seek asylum. Many first left Haiti in 2010 following a devastating earthquake that killed over 100,000 people and have been pushed from country to country ever since.

With Haiti in disarray following the assassination of the president, economic collapse, and another earthquake that killed thousands, they came to the United States hoping they would be welcomed and allowed to seek asylum. Instead, they were met with attacks from Border Patrol agents on horseback and a Biden administration that insisted it would deport them all.

On the campaign trail and after he took office, President Biden promised to restore a system of humanitarian protection at the border that the Trump administration had devastated. Despite these promises, President Biden has continued the practice of expelling hundreds of thousands of migrants at the border under Title 42, even those seeking asylum.

Now, as thousands in Del Rio await news of their fate, the disconnect between the Biden administration’s promises and its actions have become visible to the rest of the nation.

All people who are physically present in the United States have the right to apply for asylum, “whether or not” they come through a port of entry or cross the border without authorization. Since Title 42 went into effect at the border in March 2020, the Border Patrol has carried out over 1,100,000 expulsions, regardless of whether the person was seeking asylum or not. Yet even after a federal judge ruled last week that the Title 42 policy was illegal – at least in terms of its use against families with children – the Biden administration chose to immediately appeal that decision.

President Biden’s choice to double down on Title 42 has been disastrous for the most vulnerable at the border seeking our help. Families have chosen to self-separate, sending their children across the border alone in the hopes they’ll be safe. Thousands of people sent back to Mexico have been the victims of crimes. Migrant deaths are at their highest level in decades. And the right to seek asylum enshrined in law has been severely damaged.

Making matters worse, the Border Patrol’s response to the Haitians has been a violent crackdown. Lurid images show agents running people down on horseback who were crossing the river to get food and medicine for their families in the camp. Though the White House has promised to investigate the egregious behavior of those agents, it has not budged on its plan to deport the entire camp.

At a time when the United States has opened its arms to thousands of Afghan refugees, the disconnect between the welcome they are receiving, and the harsh tactics used against Haitian refugees is appalling. It is also a racial justice issue, and one that should be particularly urgent for a president who promised in his inaugural address to “deliver racial justice.”

Haitians have long been a target for the United States’ worst instincts on migration, many of which are rooted in anti-Blackness.

In the 1980s, the modern immigration detention system came into existence specifically to lock up Haitian refugees and deter them from coming to the United States. In 1982, Attorney General William F. Smith declared that “Detention of aliens seeking asylum was necessary to discourage people like the Haitians from setting sail in the first place.” Just a few years later, both Presidents George H.W. Bush and Bill Clinton locked up thousands of Haitian refugees at Guantanamo Bay in squalid camps. And under President Obama, Haitians became the first target for “metering,” the practice of limiting the number of asylum seekers at ports of entry.

President Biden’s actions in response to the Del Rio encampment are a measure of his commitment to racial justice and to restoring access to asylum at the border. Already, hundreds in the Del Rio camp have been deported back to Haiti. But thousands remain at the camp, although hope is dwindling.

It is not too late for the Biden administration to change its mind and show that the United States can finally live up to the promises it has long failed to meet. And the way to do so is clear: immediately halt all deportations to Haiti and allow those in the Del Rio camp to access the asylum process.